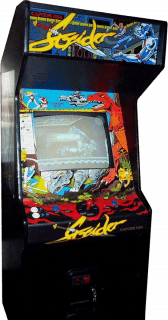 Strider is an arcade hack and slash platform video game developed and published by Capcom.  The game debuted in arcades in 1989 and utilized the Capcom Play System (CPS) arcade system board that ran games from a removable daughterboard.  The CPS system board allowed Capcom to develop many arcade games using the same core chipset and simply switch out smaller daughterboards that held the game data.   Capcom released over 25 titles for the CPS between 1988 and 1995 with Strider being one of the first games to be created specifically for the CPS hardware.

The concept for the Strider series was conceived as part of a collaboration project between Capcom and manga studio Moto Kikaku.  Capcom and Moto Kikaku had a vision to create a story that could be told through the form of a manga and developed into a video game.  The collaboration which was originally conceived by Capcom involved the creation of three individual projects, a manga series, a Nintendo Entertainment System game based on the manga series and an original storyline arcade game.

Strider was first introduced in 1988 with the release of the manga series which was featured in the monthly magazine “Comic Comptiq”.  The manga was the debut of the Strider series and introduced the series protagonist, Hiryu, prior to the release of the immensely popular arcade game.  The manga was released in chapters and was included in Comic Comptiq monthly from May 1988 to October 1988.   The 6-chapter manga created a fanbase for the series leading up the 1989 arcade release.

While the Nintendo Entertainment System version of Strider closely follows the plot of the Manga series the arcade version had its own original plot.   The story of the arcade version takes place in 2048 in a dystopian society, where the evil dictator known as the “Grand Master Meio” is plotting to take over the universe.  Hiryu, the youngest member of an organization of high-tech ninja agents known as the “Striders”, is tasked with putting an end to the Grand Master Meio’s plan once and for all. 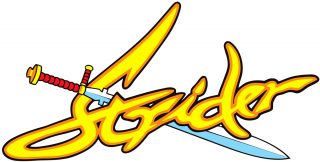 The arcade game became immensely popular when in released in 1989, resulting in Capcom porting the game to many home video game consoles and home computers.   The Sega Genesis port in particular became extremely successful, winning various video game of the year and best graphics awards in 1990.  The game was highly praised upon release for it’s innovative gameplay and has been cited as being a major influence on the Ninja Gaiden, Devil May Cry and God of War franchises.

Publisher U.S. Gold licensed the rights to the game and hired the developer Tiertex to create ports for various home computers such as the Amiga, Amstrad CPC, Atari ST, Commodore 64 and ZX Spectrum.  Under license from Capcom, U.S. Gold had Tiertex develop a sequel titled Strider II in Europe and “Journey From Darkness: Strider Returns” in North America.  The sequel was created without Capcom’s involvement and released for various computer platforms as well as the Genesis, Game Gear and Master System.  Capcom later developed and released their own sequel titled Strider 2 in 2000 for the arcades and PlayStation.  The original arcade game received a remake by developer Double Helix Games in 2014 and released on the PlayStation Network, Xbox Live Arcade and Steam. 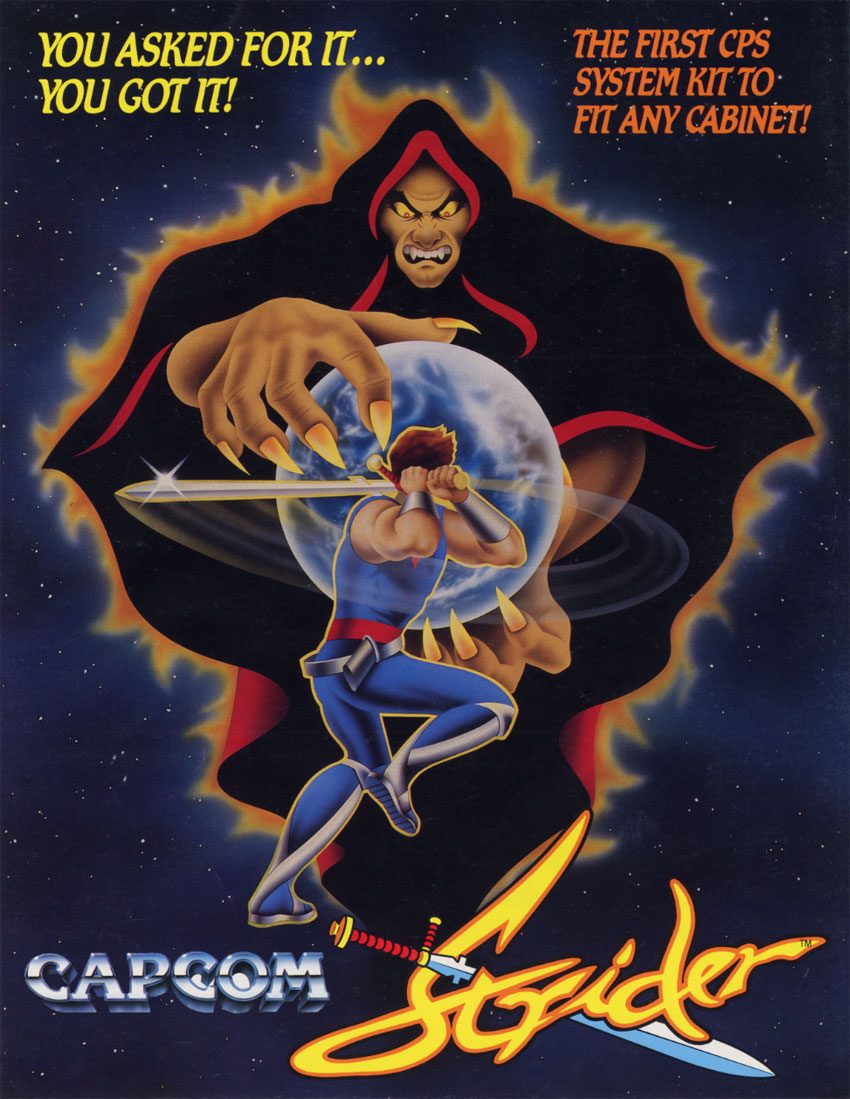 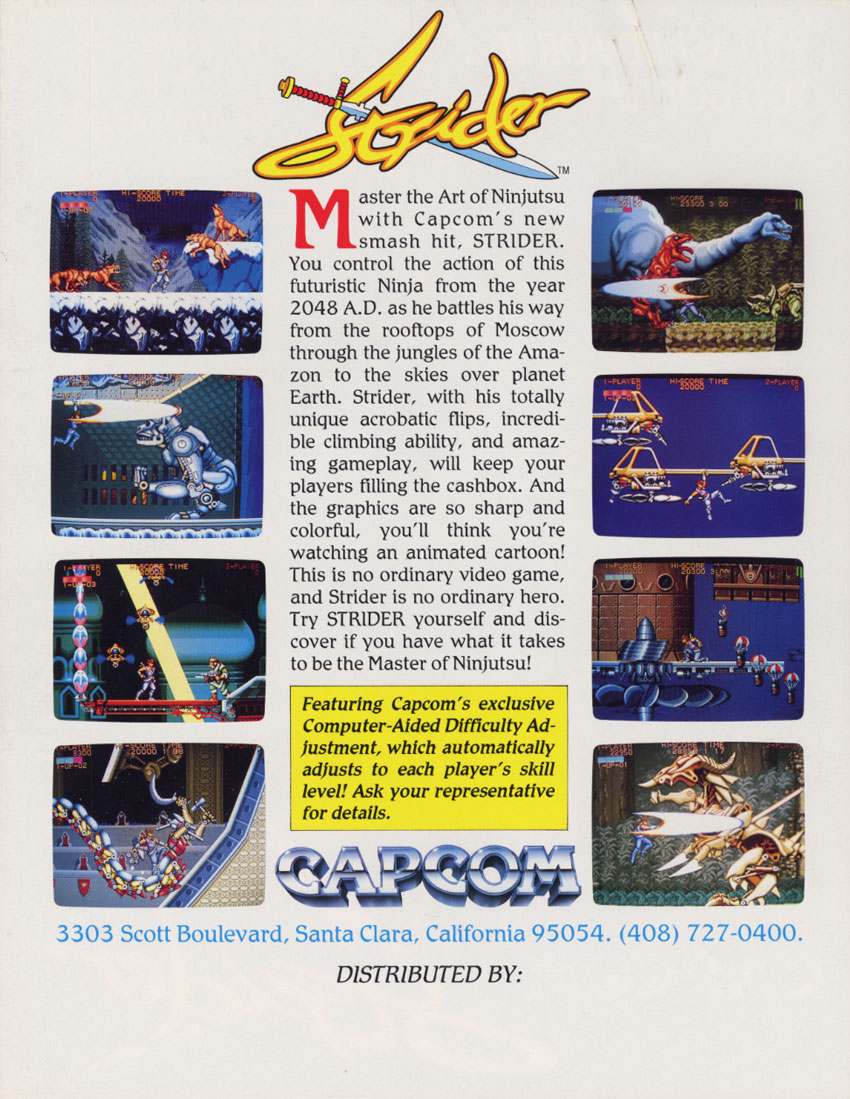 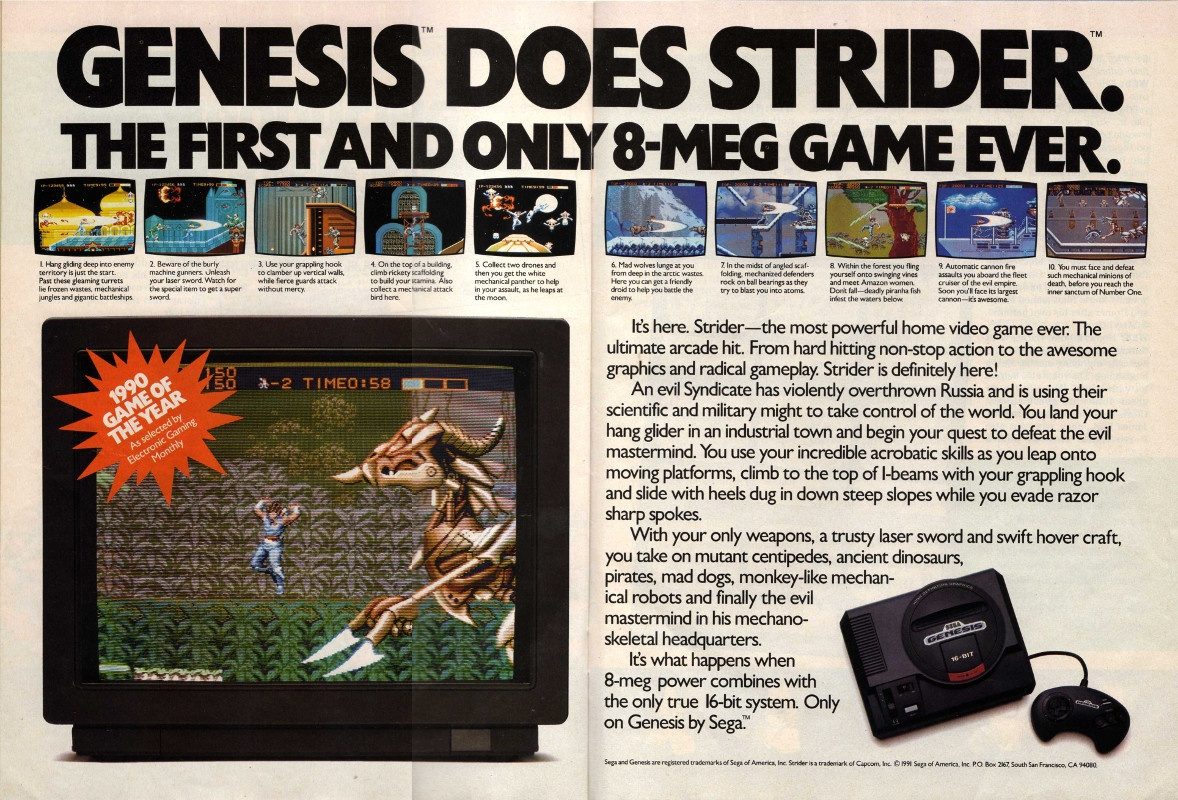