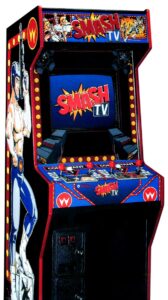 Smash TV is a multidirectional shooter developed and published by Williams for arcades. The game is a dual-stick shooter in the same vein as the 1982 arcade game Robotron: 2084. Smash TV along with Robotron: 2084 were designed by Eugene Jarvis and some consider the game to be a spin-off of Robotron due to the similarities in gameplay.

The game is set in the year 1999 and the most popular television show is Smash T.V., an ultra violent gameshow that is filmed in front of a live studio audience and broadcasted worldwide. The show places armed contestants loose in a series of deadly arenas filled with beasts and killer robots in a kill or be killed scenario. The goal of the game is to destroy everything within the arena to obtain cash and prizes. Contestants compete against each other to see who can get the most cash and prizes throughout the game.

The arcade game released in April 1990 and was met with mainstream success. The twin-stick shooter allowed players to control the onscreen characters by using two joysticks. One joystick alters the player’s movement, while the other alters the direction of weapon fire. This made the gameplay very fluent and was a key aspect in the game’s success. The success of Smash TV spawned the creation of a multitude of ports for various consoles and computers however replicating the popular twin-stick shooter controls in each port proved to be challenging.

Each port handled the implementation of the game’s control mechanism differently as each console controller contained different layouts and number of buttons. On the Nintendo Entertainment System players were given the option to use two controllers allowing the use of the D-pad on the second controller to control the direction the character shoots. To take advantage of this feature for 2-player co-op a multitap adaptor was required, both the NES Four Score and NES Satellite were compatible with the game. On the Super Nintendo the dual-stick shooter worked particularly well using the four main buttons (A, B, X and Y) as they were laid out on the controls using the same position as a D-pad. This enabled the player to shoot in one direction while using the D-pad to move the character in the opposite direction. This same control scheme could not be replicated on the Sega Genesis / Mega Drive with there linear 3 button controller layout.

Due to the different control options available on each port resulted in the console versions of the game to receive mixed to positive reviews, however the game sold fairly well on all systems. The Super Nintendo, Genesis, Sega Master System and Game Gear versions of the game were released using the title “Super Smash TV”, while all other ports used the game’s original title “Smash TV”. In 1992 Williams released Total Carnage, another arcade game that shares many gameplay elements with Smash TV and was created by the same design team at Williams but is not considered a sequel to the game. 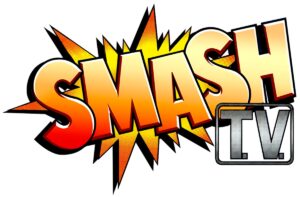 Slopes Game Room is a YouTube channel hosted by Daniel Ibbertson, a.k.a. DJ Slope.  The channel aims to provide a complete history of gaming through documentaries and fact shows. 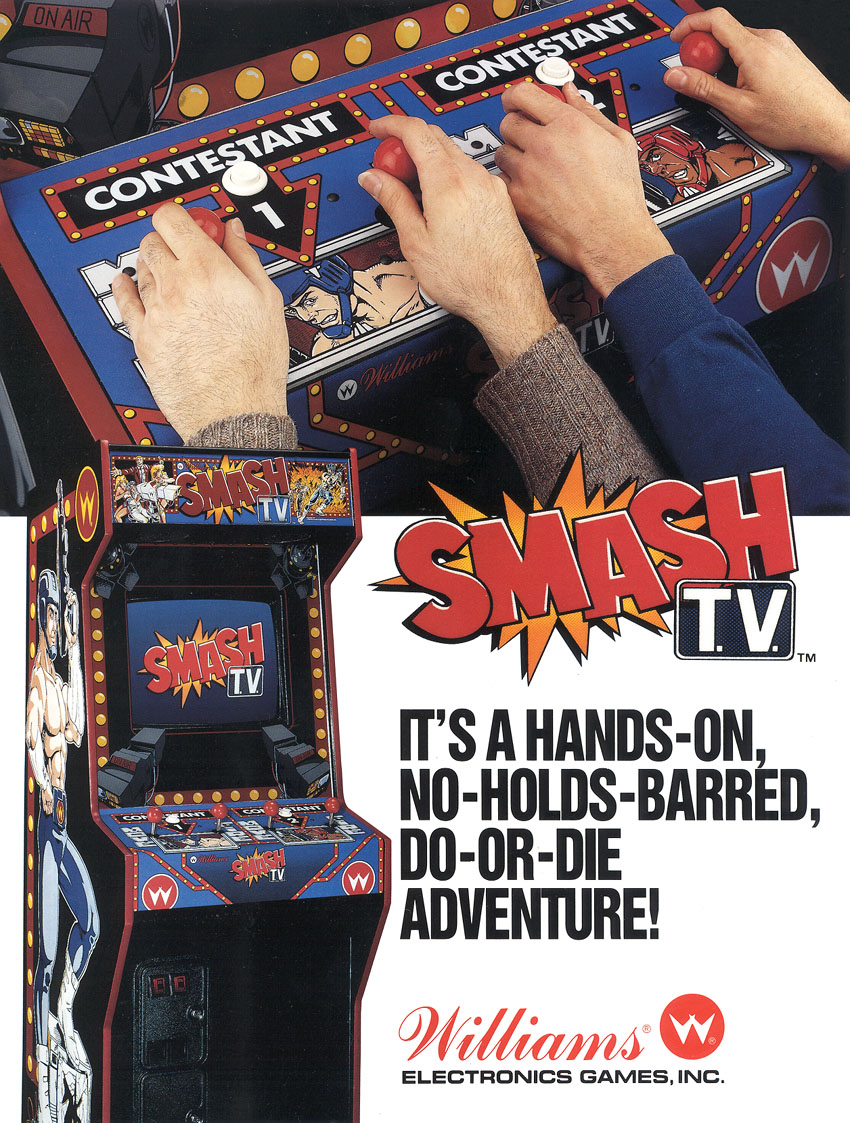