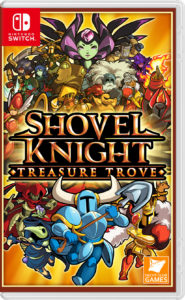 Shovel Knight is a 2D side scrolling action platformer developed and published by Yacht Club Games. The inspiration behind Shovel Knight started by former WayForward Technologies employees Nick Wozniak and Sean Velasco discussing older style video games that they grew up with.

The conversation evolved into discussion around creating their own game in the style of the Nintendo Entertainment System and eventually the down thrust move from Zelda II: The Adventure of Link was brought up as a move that both designers liked. They both thought that the move would be better suited with a shovel opposed to a sword, and the idea of Shovel Knight was born.

Shovel Knight was announced on March 17, 2013 alongside the launch of their Kickstarter campaign with the goal to reach a minimum of $75,000 for the development of the game. The campaign was extremely successful reaching their goal in late March and went on to collect a total of $311,502, fulfilling all stretch goals that were set by Yacht Club Games. The additional stretch goals included a four-player battle mode, a mission-based challenge mode, an additional mode that swaps all the characters’ genders and additional playable story campaigns for three boss characters.

Following the successful Kickstarter campaign, the game was released for PC, Nintendo 3DS and Wii U in June 2014. The game was ported to OS X and Linux in September 2014 followed by the PlayStation 3, PlayStation 4, PlayStation Vita and Xbox One in April 2015 then finally to the Nintendo Switch in March 2017. On December 10, 2019 Yacht Club Games released the final and full version of the game entitled Shovel Knight: Treasure Trove which includes the original game, and all stretch goal games.

Shovel Knight: A Kickstarter That Was Too Successful