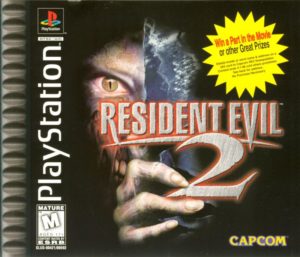 Resident Evil 2 is a survival horror video game developed and published by Capcom for the Sony PlayStation.  Similar to the previous installment in the series, Resident Evil 2 is a 3D action-adventure game that utilizes three-dimensional polygon characters over two dimensional pre-rendered backgrounds.  The gameplay is viewed through a variety of fixed camera angles in each room to provide a cinematic like experience.

The game takes place two months after the events of the first Resident Evil unfold.  Even though Chris Redfield and Jill Valentine were able to destroy the Umbrella corporation’s mutated creatures in the first game, Umbrella’s experiments with the T-virus continued unhindered. Claire Redfield, the younger sister of Chris, and Leon Kennedy, a rookie cop on his first day on the job, arrive in a mundane midwestern town of Raccoon City only to find the city in flaming ruins.  They quickly discover that the residents of the city have all been transformed into mindless flesh-eating zombies. Although Claire and Leon team up, they are soon separated and trapped inside the city by a car crash. Seeking refuge within the Raccoon City police station, each character must find a way to escape from the nightmare while solving the mystery of what happened to Raccoon City.

Following in the footsteps as the original game in the series, players can choose to play as one of two characters.  Players can select either Leon Kennedy or Claire Redfield to playthrough the game.  Both characters start off with the same scenario and objective however the story unfolds slightly different as each character takes different paths and meet different people throughout the course of the game.

Development of the game began a month after the completion of the first installment in the series.  After the success of the first Resident Evil, Shinji Mikami was promoted to producer where he oversaw the development of Resident Evil 2 and Resident Evil 3: Nemesis while directing another new survival horror game, “Dino Crisis” for the PlayStation.  Capcom appointed Hideki Kamiya the role of director for Resident Evil 2 where he led a team of approximately 40 to 50 resources which would later form Capcom Production Studio 4.  The team consisted of newer Capcom staff and over half of the original Resident Evil development team. 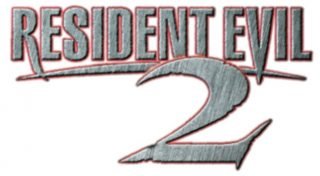 The first footage of the game was shown in July 1996 at the V Jump Festival and was only a few months into development.  The footage shown at the festival was drastically different than the games final release and has since been referred to as Resident Evil 1.5 by Mikami.  The version shown followed the same basic plot where a zombie outbreak was still plaguing Racoon City two months after the events of the original game however, the Umbrella Corporation had been closed as a consequence of conducting illegal experiments.

In the alpha version of the game during the early stages of development the game featured two main protagonists, Leon S. Kennedy and Elza Walker.  The development team wanted to retain the same level of fear and suspense that the original game created and decided to incorporate two lead characters with little to no experience.  The two characters featured in the original build of the game were Leon Kennedy, a rookie cop and Elza Walker, a college student who has returned to her hometown of Raccoon City during vacation break.   Unlike the final version of the game the two characters paths did not cross, and each character had two separate supporting partners instead of one.  During the adventure Leon would receive assistance from follow police officer, Marvin Branagh and a researcher named Linda, while Elza was aided by Sherry Birkin and John.

The game still featured the Racoon City police station as a main setting however was much smaller in size and had a more modern and realistic design.  The development team came up with new and unique features to implement into the sequel such as incorporating more zombies on the screen at once by lowering each enemy model’s polygon count, introducing protective clothing to enhance the players defense and enable them to carry more items.   While each game asset was good individually the development team did not implement them with a cohesive plan from the beginning of the game’s development.   Mikami expected that everything would come together in the three months leading up to the game’s projected May 1997 release date however that was not the case and the decision was made to restart the game’s development.

Mikami felt that the gameplay and locations were dull and that the game would not meet the desired outcome that the team was trying to achieve.  The original build since labelled Resident Evil 1.5 was scrapped at roughly 60 to 80 percent complete in favor of beginning new.  One of the key indifferences that influenced the redevelopment of the game was that Mikami planned to end the series with Resident Evil 2.   He did not plan for the series to continue forward as it has; this was the vision of Yoshiki Okamoto.

Capcom supervisor Yoshiki Okamoto was not pleased with the original story as it was too conclusive and did not allow for future installments.  His vision for the series was to create a fictional universe that could be easily expanded upon to create a metaseries that would turn Resident Evil into a franchise similar to the television series Gundam and film series James Bond.  Having a core plot that could allow for separate self-contained stories to be created from common elements was vital for the series to grow.  As the development team struggled to rewrite the game’s plot, Okamoto consulted Noboru Sugimura, professional screenwriter to assist.

Sugimura was enthusiastic at the opportunity to build upon the first game’s story.  He was initially contracted as a consultant for the development team, but Okamoto became so impressed with his ability to easily solve script problems he asked Sugimura to compose the entire story for the game.   One of the fundamental changes that Sugimura made to the story that the development team created was to change the character Elza Walker into Claire Redfield for the plot to have a connection to the original game.  In addition to changing one of the lead characters the decision was made to intertwine their paths throughout the game instead of keeping them separate.  This became a key element of the game and separated it from its predecessor.

Capcom set a sales objective of two million units for the game and in an effort to try and attract new customers director Hideki Kamiya implemented a flashier, Hollywood-like story presentation.  As the game designers redesigned the game from the ground up to fit the changes, the programmers and other resources within the development team were assigned to work on Resident Evil Director’s Cut.  Resident Evil Director’s Cut released in September 1997 and shipped with a demo disc of Resident Evil 2 to help promote the upcoming sequel.

Upon its release on January 21, 1998, the game was highly praised for its atmosphere, setting, graphics, audio, scenarios, and overall gameplay.  The game keeps the core elements that made the first game in the series successful and improved upon them in every way.  The sequel became a commercial success and became one of the most popular PlayStation games, selling over 4.96 million units.  The success of the game led Capcom to port the game to PC, Nintendo 64 and Dreamcast the following year.   Due to high demand from fans of the franchise a remake of the game was created for the PlayStation 4, Xbox One and PC which released in 2019. 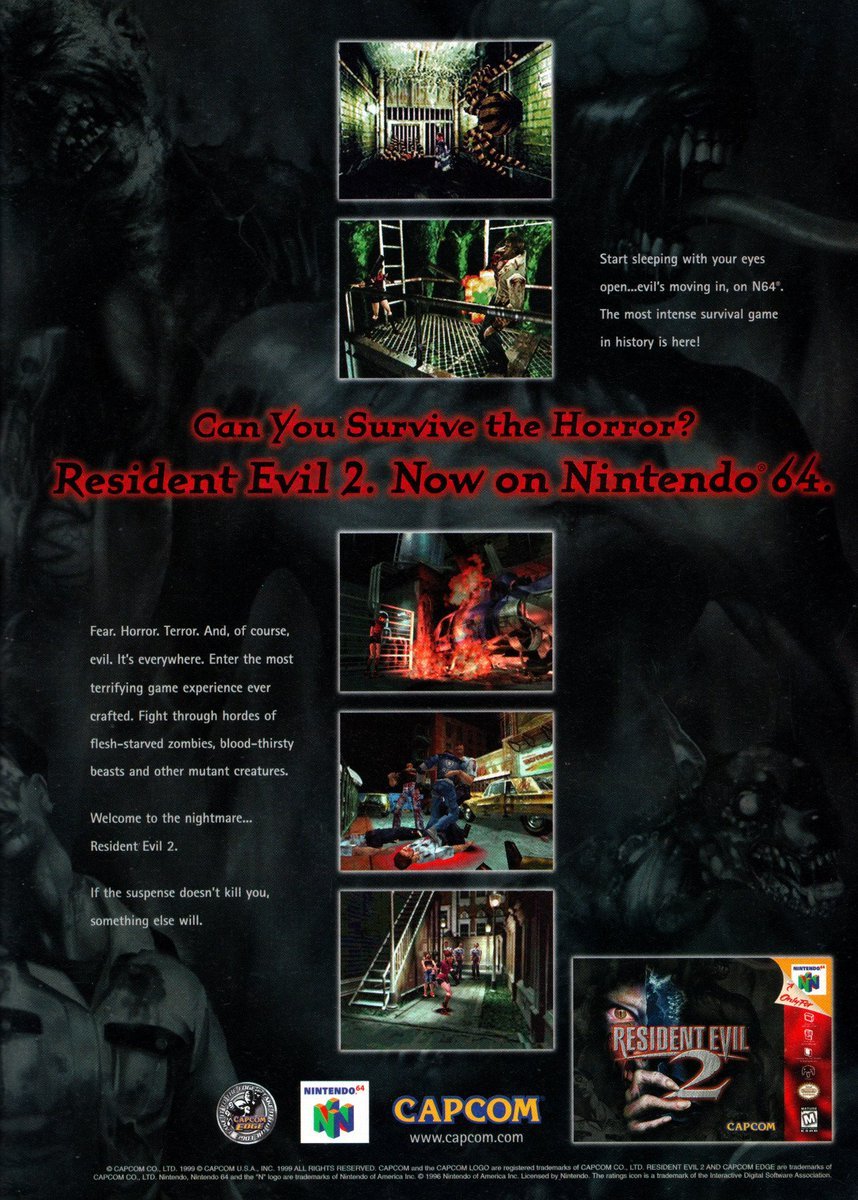 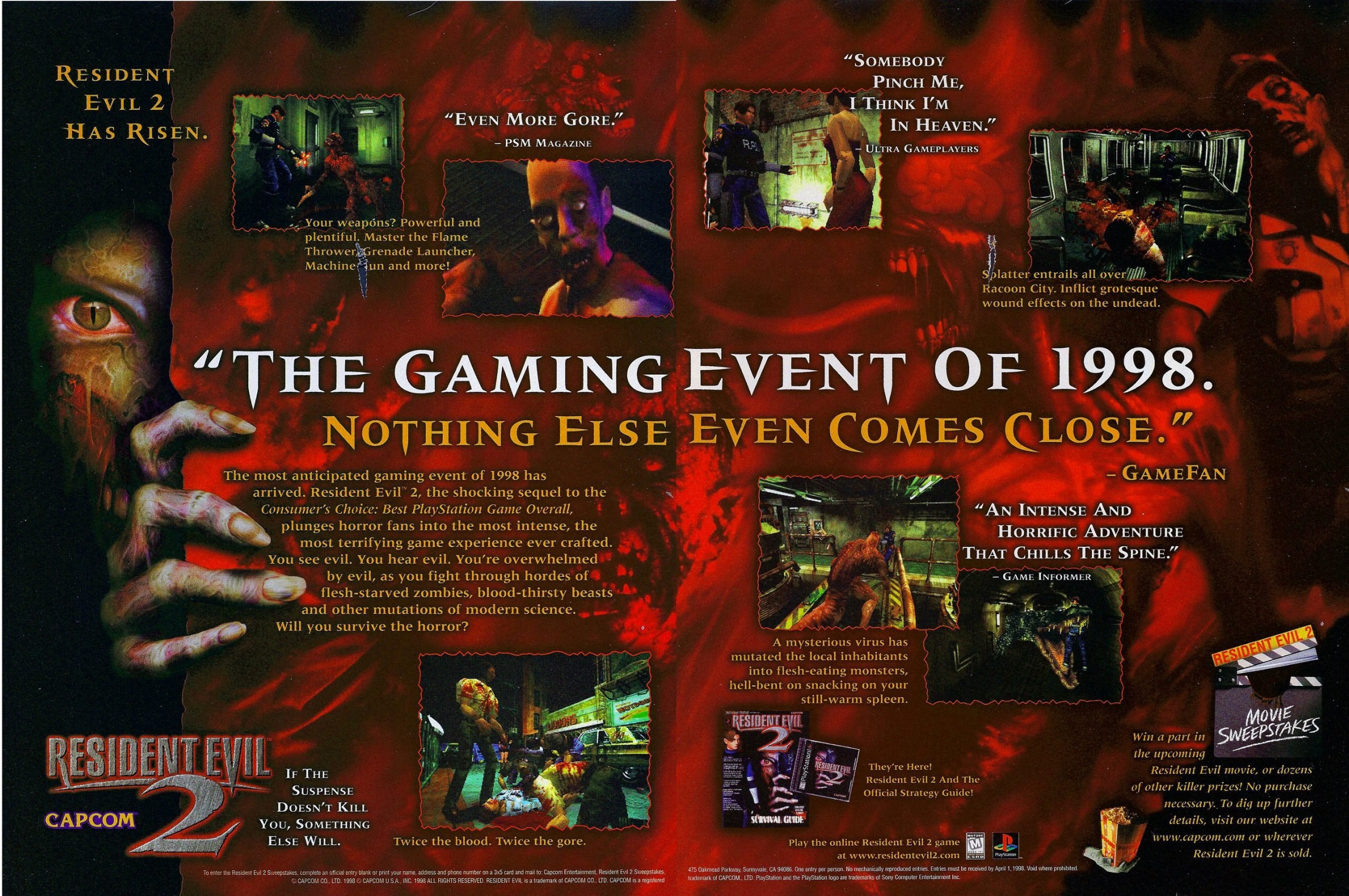