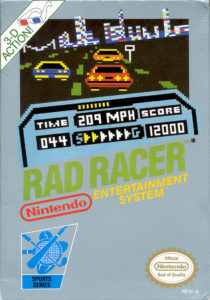 Rad Racer is an arcade style racing game developed by Square for the Nintendo Entertainment System. The game was originally released in Japan for the Famicom under the title “Highway Star” in 1987 and was renamed when it was localized for North America and Europe.

The founder of Square, Masafumi Miyamoto wanted to demonstrate Nasir Gebelli’s 3D programming techniques by releasing the game as part of an attempt by Square to make 3D games. In Japan it was one of a few titles designed for use with Nintendo’s Famicom 3D system, a peripheral used to provide a 3D experience.

Since Nintendo never released the Famicom 3D system for the Nintendo Entertainment System the game was modified and released in North America and Europe for use with the standard red & blue paper 3D glasses which were bundled in with the game. Players had the ability to activate and deactivate 3D mode at will by pressing the “select” button.

Players are provided two types of cars to select between, a 328 Twin Turbo or a Formula 1 with the objective to race to the goal within a given time limit. Along each of the eight courses are several checkpoints which will increase the amount of time available to reach the finish line. As one of the premier racers of it’s time it is considered one of the best racing games on the Nintendo Entertainment System.

The game was compatible with Mattel’s 1989 release of the Power Glove, a controller accessory for the Nintendo Entertainment System. The new accessory was included and promoted in the 1989 movie “The Wizard”. Rad Racer was an ideal game for the new accessory and was used in “The Wizard” to demonstrate the Power Glove. The game was a success selling over 1.96 million copies and in 1990, Square followed up with an exclusive North American sequel with the release of Rad Racer II. 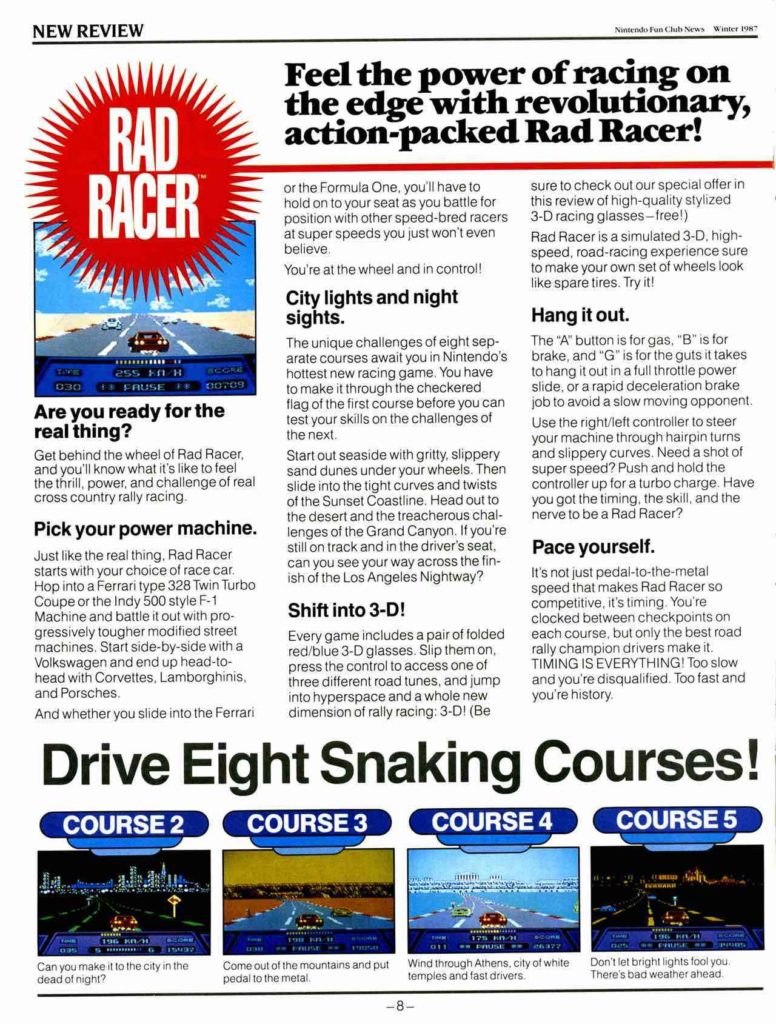