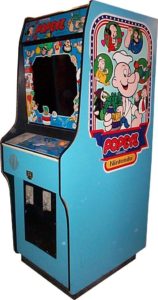 Popeye is a platforming arcade video game based on the comic strip and cartoon series of the same name. The game was developed by Nintendo R&D1 and published by Nintendo in North America and Japan in 1982. The game was licensed by Atari for exclusive release in the United Kingdom and Ireland, featuring an Atari-designed and manufactured cabinet.

Shigeru Miyamoto had the intensions to use the Popeye characters in his efforts to redesign unsold Radar Scope arcade units which did not sell well in North America. Nintendo was unable to obtain the license to use the characters at the time and Miyamoto’s concept evolved and became Donkey Kong.

Players take on the role of Popeye who needs to catch various items that are being dropped by Olive Oyl. In level 1 the objective is to collect 24 hearts, in level 2 the player must obtain 16 music notes and in level 3 Olive Oyl is yelling “HELP” in which 24 letters need to be collected to spell the word help six times. There are many obstacles in the way preventing the player from completing the required task. Brutus wanders around the screen trying to catch Popeye as a Sea Hag randomly appears on the screen throwing objects that must be avoided or destroyed by punching them.

Punching destroys items such as bottles, vultures and skulls, however Popeye cannot attack Brutus directly by punching. Each level has a can of spinach which can be punched to provide the player with invincibility allowing them to knock out Brutus by running into him.

The game was quite successful upon release leading Parker Brothers to contract Nintendo to port the game to various consoles. The game was ported to the Odyssey², Atari 2600, Atari 5200, Atari 8-bit, Colecovision, Intellivision, Commodore 64 and TI-99/4A by Parker Brothers, while Nintendo themselves published the port for the Famicom and Nintendo Entertainment System.

Video Game Years & An In-Depth Look at Popeye with Retronauts 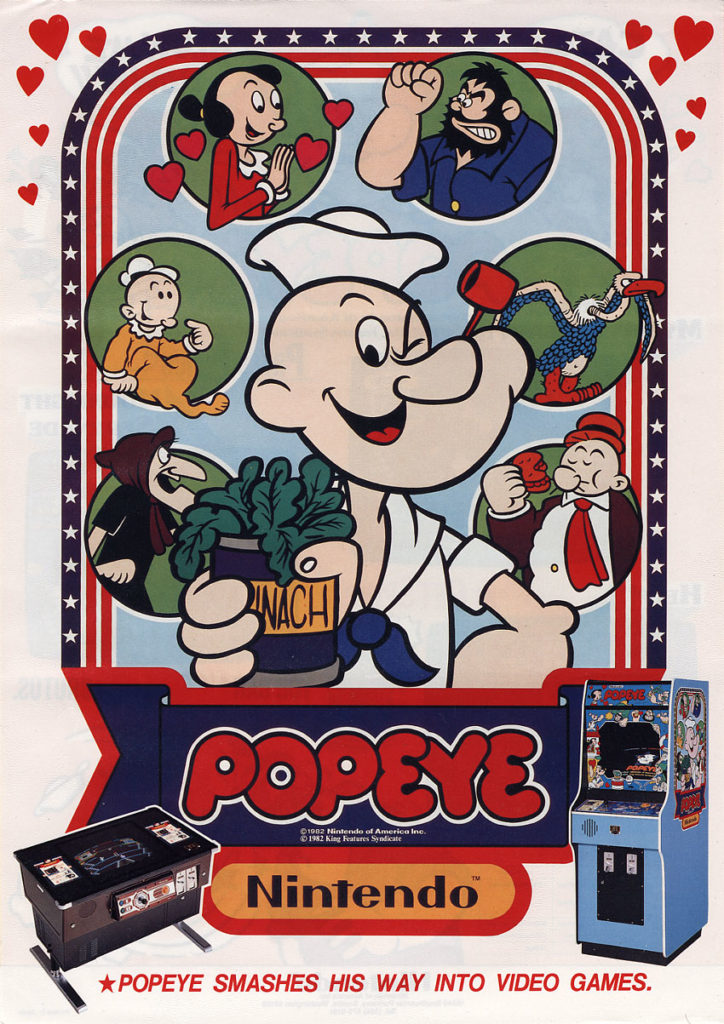