Police Quest: In Pursuit of the Death ANgel 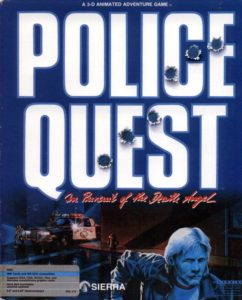 Police Quest: In Pursuit of the Death Angel is an adventure game developed and published by Sierra On-Line in 1987 for home computers. Designed by former police officer Jim Walls, the game was created as an adventure police simulation game.

The game utilized Sierra On-Line’s in-house game engine Adventure Game Interpreter (AGI) which was originally developed for the creation of King’s Quest. It is the first game in the Police Quest series and was the most realistic series developed by Sierra in the late 1980s when compared to Leisure Suit Larry, King’s Quest and Space Quest as it featured many puzzles where proper police procedure is required to succeed. Gameplay is centered on interacting with the environment to resolve a series of scenarios. These largely revolve around typical police work, such as securing crime scenes and recovering stolen vehicles. The lack of “traditional” puzzles made the game stand out at the time of release.

Players take the role of Sonny Bonds, a 15-year veteran police officer in the town of Lytton, California. His supervising officer, Sergeant Dooley, reveals in the morning briefing that the local teenagers are getting out of hand and are using cocaine, as well as a report of a stolen 1983 black Cadillac which Bonds and his fellow officers are ordered to keep a lookout for.

Assigned to traffic duty, Sonny investigates what appears to be a simple car crash but turns out to be a homicide. Bonds discovers that the deceased driver of the vehicle (a drug dealer named Lonny West) has been shot in the head. After Sergeant Dooley arrives on the scene and takes control of the investigation, Bonds returns to his regular patrol. Relieved by his supervisor, Sergeant Dooley, Sonny goes on a short coffee break with a fellow officer and returns to duty. He gives a traffic violation citation to a driver, single-handedly faces a tough gang of drunken bikers, and makes a DUI arrest. As the game progresses, he advances from patrol officer to temporary narcotics detective to undercover agent in hope of tracking down a murderous drug dealer named Jessie Bains, “The Death Angel”. In order to find Jessie Bains, Sonny enlists the help of his former high school sweetheart, “Sweet Cheeks” Marie, who is now working as a prostitute.

Sierra On-Line continued developing the series and two direct sequels that were developed by Jim Walls were released, Police Quest II: The Vengeance in 1988 and Police Quest III: The Kindred in 1991. The original game received a remake using Sierra’s Creative Interpreter (SCI) engine in 1992 before the series shifted direction with future games being designed by Tammy Dargan and produced by former L.A. Chief Daryl Gates.

Pushing Up Roses is a YouTube Channel that provides a unique perspective on everything from television shows, movies to video games. 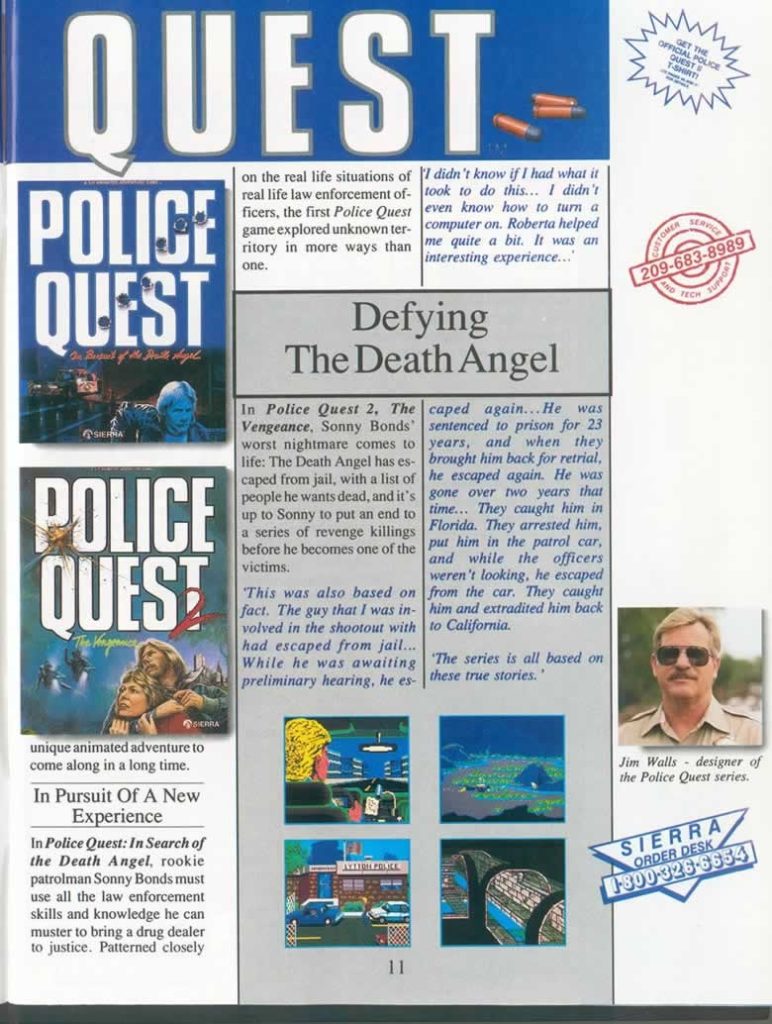