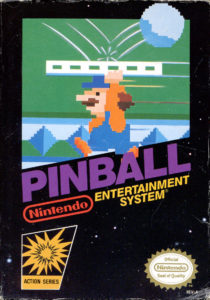 Pinball is a 1984 pinball video game initially released on the Family Computer (Famicom) in Japan and later released as one of 18 launch titles for the Nintendo Entertainment System in North America. Developed by the team at Nintendo R&D1, the game was inspired by the Game & Watch Pinball handheld which released in December of 1983. 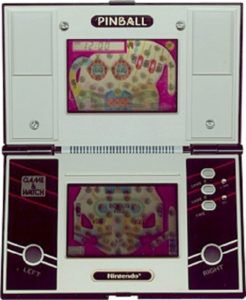 Nintendo manufactured approximately 250,000 units of the Game & Watch Pinball handheld and the R&D1 team felt that the game would be a good fit for their Famicom home videogame console. The playfield is split into two parts similar to the multiscreen Game & Watch handheld and represents the length of a traditional pinball table.

The game plays like a typical pinball machine where players launch a ball with the use of a plunger at the bottom of the pinball table. The ball is shot to the top of the table and falls to the bottom of the screen where the player controls a set of flippers to deflect the ball to keep it from falling down to the second screen and ultimately a hole at the bottom of the table. Hidden within the table is a special bonus section that plays similar to Breakout, where players control Mario who is carrying a platform. The object is to rescue a trapped Pauline by bouncing the ball off of the platform Mario is carrying to hit various targets. When the blocks under Pauline are broken, she will drop down where Mario needs to catch her on the platform to rescue her and earn the player bonus points.

The 1984 release of pinball for the Famicom was the first game Satoru Iwata worked on that was published by Nintendo. Iwata was not a member of the original development team but was called upon to assist with fixing the programming based on his knowledge of the 6502 based processor used in the Famicom hardware. This was the beginning of Iwata’s and HAL Laboratory’s relationship working as contractors for Nintendo to bring their visual concepts and design to fruition through programming.