Phantasy Star is a role-playing video game developed and published by Sega for the Master System.  Released in December 1987 in Japan, the game is one of the earliest Japanese role-playing games released on a home console.

The development of the game came about when Sega felt like they needed a role-playing game for their Master System console to compete in the emerging RPG market.   Games such as Dragon Quest were being released for Nintendo’s Famicom home console and were very popular in Japan.

Sega wanted to introduce their own style of RPG that would be exclusive to the Master System in order to attract consumers and grow their market share in the home console market.  They believed that they would not be able to rely on third-party developers to take the initiative to design an RPG game for the Master System as Sega’s home console market share was only a tenth of Nintendo’s.

Sega assigned game designer, Kotaro Hayashida to the project as he was interested in creating an RPG title and was recognized for his work on Alex Kidd in Miracle World.  In addition to Hayashida, Sega approached the programmer of the Out Run and Space Harrier home console conversions, Yuji Naka.  Hayashida and Naka lead the initiative and began to form a team of resources from various Sega departments to develop a role-playing game.

The team that was constructed consisted of a total of eleven resources with Hayashida leading the design aspect of the game and Naka leading the programming.  One of the resources that was assigned to the project was Chieko Aoki.  Prior to being assigned to the new RPG game, Aoki had already been working on an original story to present to Sega for a potential concept for a game.   Her draft story even had most of the dialogue already completed and after joining the development team for the creation of a new role-playing game she presented the story she was working on. 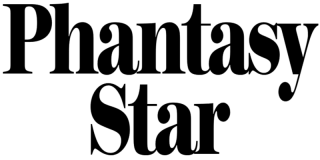 The team liked the concept and used Aoki’s story as the initial draft for the RPG project.  The team worked together to shape the game’s overall plot and storyline.  They wanted their game to be different from other RPGs that were on the market and decided the best way to accomplish that would be to introduce a different setting.  Most role-playing games at the time were set in a medieval time period and the development team decided to go in a slightly different direction by introducing a setting that was a mix between medieval fantasy and science fiction, an idea inspired by Star Wars.

In addition to using a space themed setting, the team incorporated other unique ideas that were not traditionally seen in RPGs at the time.   They added aspects of 3D dungeon crawling, a female protagonist, and extensive animations which ultimately set their game apart from other RPGs of the time.  The title Phantasy Star was selected after programmer Yuji Naka wanted to use the word Fantasy from a song he enjoyed titled, “Nagisa no Fantasy”.  Once the word Fantasy was chosen the team used it along with various words looking to see what would suit the game’s image.  From playing around with a few combinations the team landed on Phantasy Star, which seem to best match the image of the game.

The game follows a female heroine, Alis on her journey to defeat the evil ruler of the Algol star system, King Lassic.  Nero, the leader of a rebel group and Alis’ brother was brutally killed by Lassic’s robotic policemen.  Nero’s last words were spoken to his sister Alis where he implores her to find a warrior named Odin.  Alis swears revenge against Lassic and embarks on a journey to find Odin and other companions who would help her defeat, King Lassic.  Alis traverses between planets, gathering a party of fighters and collecting the items she needs to avenge her brother’s death and return peace to the star system.

The game was praised upon release for its grand sense of adventure due to its advanced visual effects and deep gameplay however was ultimately overshadowed by the release of Final Fantasy for the Famicom that was released two days earlier.  The vastly more popular Famicom allowed Final Fantasy to reach a much larger audience, but Phantasy Star was still able to make a strong impression on gamers.   The game is considered a landmark role-playing game for its use of characters and science fiction fantasy setting.

The game was successful enough for Sega to continue to invest in the story and create a series of sequels.   Over the years the game has been re-released on several platforms, included in numerous compilations, and had a Japanese exclusive remake from the PlayStation 2 in 2003. 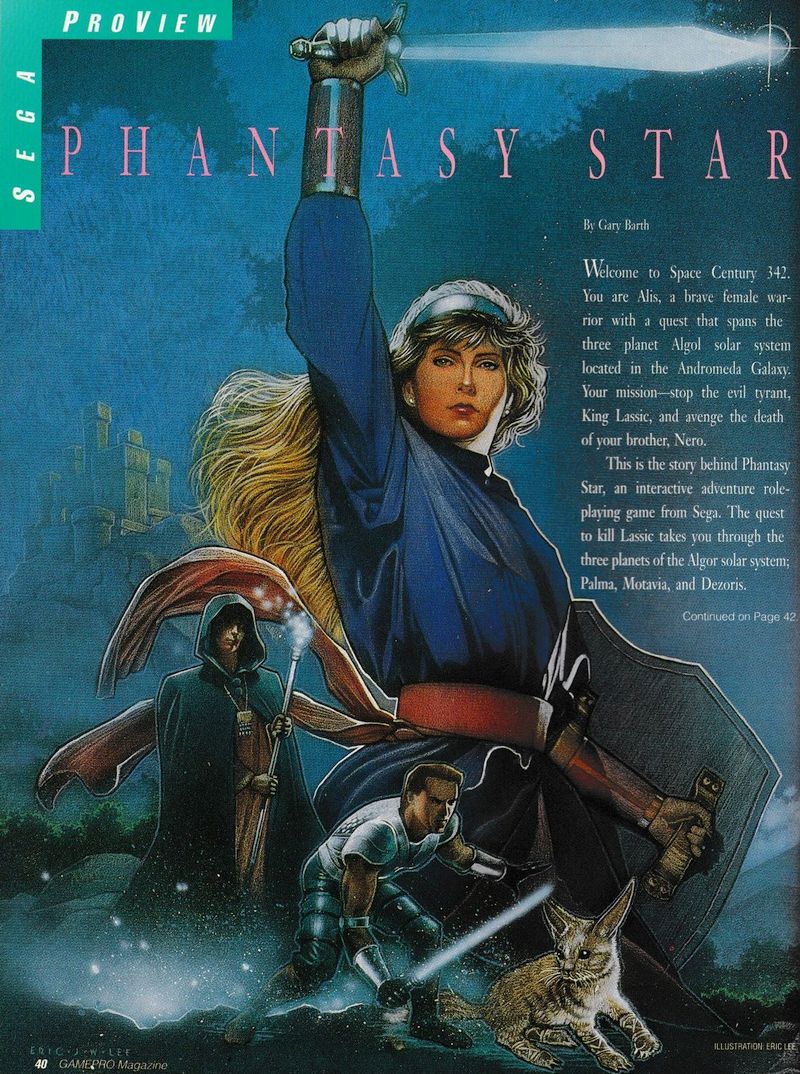 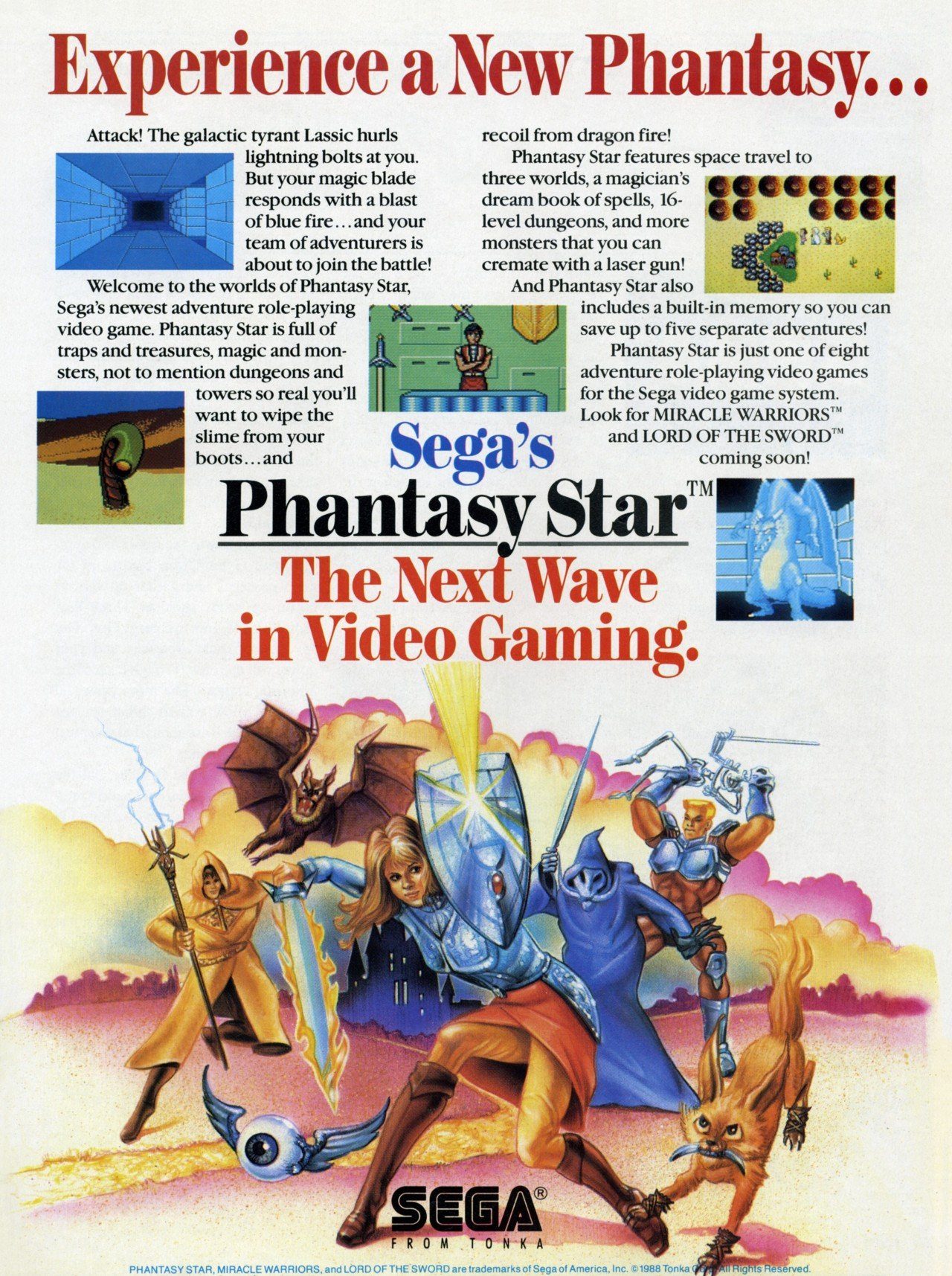