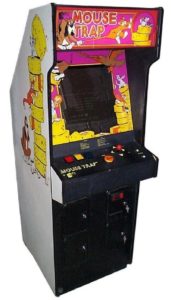 Mouse Trap is an arcade maze game that was developed and published by Exidy.  The design of the game is in the vein of Pac-Man with Pac-Man replaced with a mouse, the dots with cheese, the ghosts with cats and the power pellets with bones.  The game made its arcade debut in December 1981 a little over a year after Namco’s Pac-Man.

Exidy improved on the Pac-Man formula by implementing unique elements to make the game more strategic and difficult in nature.  The arcade cabinet had three colored door buttons that could be used to control doors in the corridors of the maze.  The buttons controlled the corresponding colored doors in the maze which could be used to open and close the doors.  This new element allowed the mouse to pass through blocked areas and trap the cats. 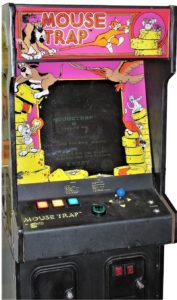 The cabinet also has a dog button which can be pressed to turn the mouse into a dog which can be used to attack the cats.  Unlike Pac-Man power pellets which would immediately turn Pac-Man invincible the bones which are required to turn into a dog can be collected and used at will by pressing the dog button.  Adding another layer of difficulty, a hawk was added which can fly over the walls of the maze to quickly attack the mouse from the air.

Even though the game appeared to look like Pac-Man on the surface, these added elements made the game feel and play quite differently.  The game sparked the attention of Buckner & Garcia who wrote a song about the game entitled “Mousetrap” and included it on their 1982 album Pac-Man Fever.  The song used the sound effects from the game in the background and the lyrics describes the gameplay.

Coleco secured the licensing rights to port the arcade game to home consoles and they began by developing and releasing a port for their ColecoVision console in September 1982.  After releasing the port on the ColecoVision, Coleco developed ports for the Intellivsion and Atari 2600, both of which would release a month later in October of 1982. 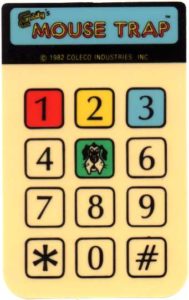 The ColecoVision and IntelliVision ports where closer in nature to the arcade experience and utilized controller overlays to incorporate the required number of buttons to simulate the arcade’s controller setup.  The Atari 2600 joystick controller did not have a number pad like its competitors’ controllers and the overlay approach could not be implemented.   Instead due to the Atari 2600 controller only having one button the game was altered heavily to accommodate its limitation.  Elements were removed from the Atari ports and the gameplay was vastly altered to simplify the control scheme where all doors were the same color and could be controlled all at once. 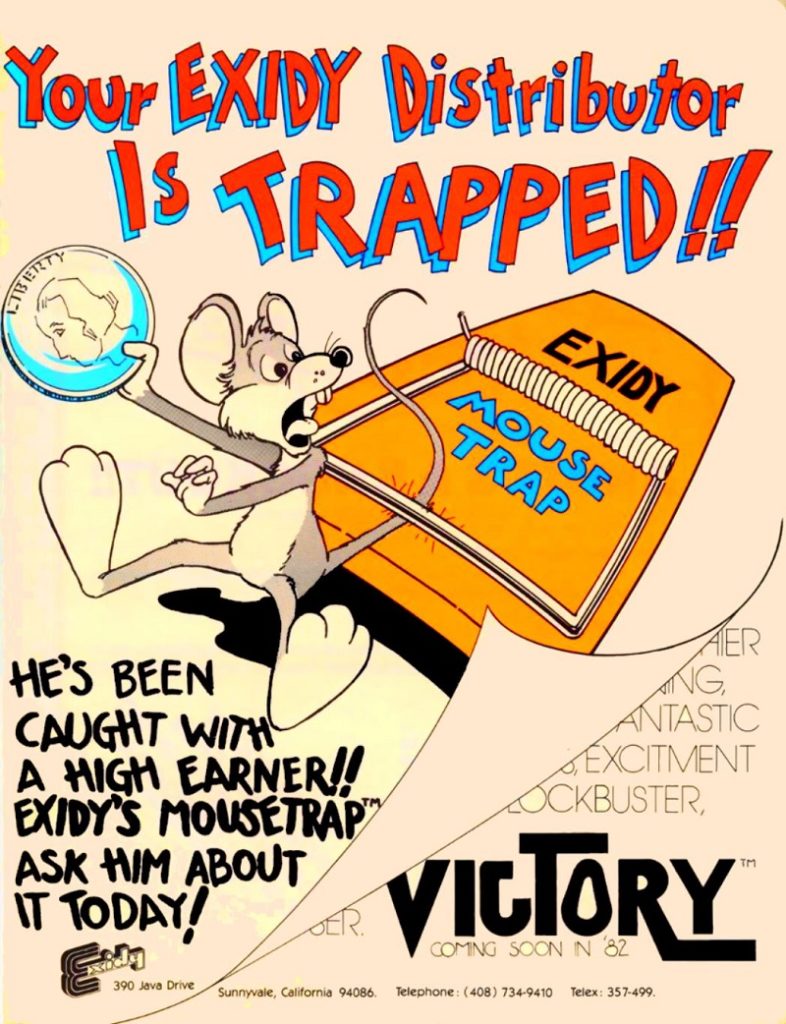