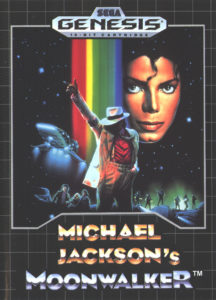 Michael Jackson’s Moonwalker is a beam ‘em up platformer developed and published by Sega for the Sega Genesis/Mega Drive and Sega Master System. Based loosely on the 1988 Michael Jackson film Moonwalker, Michael must rescue kidnapped children from the evil Mr. Big.

Two other video games have been released under the same name but were completely different games. U.S. Gold published a home computer game entitled Michael Jackson’s Moonwalker in 1989 that was developed by Irish Emerald Software Ltd and American Keypunch Software. The other version of Moonwalker was published by Sega and developed by Sega and Triumph International for the Arcade in 1990. The arcade has distinctively different gameplay from its computer and console counterparts, focusing more on beat ’em up gameplay elements rather than platforming.

The home console version that was developed for the Sega Genesis/Mega Drive and Sega Master System were actually based on an evolved version of the home computer version of the game, in contrast to the arcade version which was a three-quarters view shooter/fighter type game.

The game’s level design and music are based off the Moonwalker feature film with the gameplay focused on finding children, all of whom resemble Katie from the movie. Players take control of the lead protagonist, Michael Jackson whose standard attack is a stylish high kick that is commonly incorporated into his dance routines. If the player continues to hold the kick button, and moves Jackson backwards, he performs his Moonwalk dance move. A special move is incorporated into the gameplay where the player has the ability to destroy enemies by making them dance, however this comes at a cost as it will affect Michael’s health meter. There is also a comet that falls from the sky in particular sections of the game which has the ability to turn Michael into a robot if it is caught. 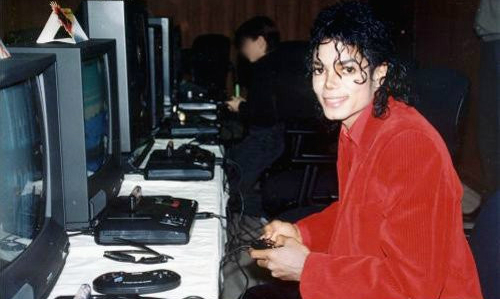 Early in the Sega Genesis/Mega Drive’s lifecycle Moonwalker was often used as a flagship product of Sega’s system, with Jackson’s persona being used along with many other celebrities in an effort to put a dent in sales of Nintendo products. The Sega Genesis/Mega Drive version of Moonwalker has now achieved cult status and is remembered as being a memorable point in Jackson’s career. Michael would work with Sega on several future products such as the music in Sonic the Hedgehog 3 and features in both Space Channel 5 and Space Channel 5: Part 2.

A Look at Michael Jackson's Moonwalker with SNES Drunk