Metroid is an action-adventure video game developed and published by Nintendo for the Family Computer Disk System and Nintendo Entertainment System video game consoles. It is the first installment in the Metroid series and was extremely successful upon release, selling over 2.3 million copies.

The game was co-developed between Nintendo’s R&D1 division and Intelligent Systems. Produced by Gunpei Yokoi, directed by Satoru Okada and Yoshio Sakamoto, Metroid set many video game first. The team implemented a nonlinear adventure-based game mechanic in which exploration was a crucial part of the experience. The game often requires that players retrace their steps in search for items to strengthen the main character Samus to progress through the game. Prior to Metroid, most ability enhancing power-ups like the mushroom in Super Mario Bros, offered only temporary benefits to the character, and they were not required to complete the game. In Metroid these items were permanent and, in many cases, required to progress and complete the game.

Metroid is one of the first games to introduce multiple endings, with five in total. In some of the endings it reveals Samus Aran’s identity by removing her power suit revealing Samus as a woman and is one of the first video games to feature a female protagonist. The North American release of the cartridge base game used a new password system giving players the ability to continue their adventure at a later time as the use of an internal battery to manage file saves was not an existing concept when Metroid was released.

Ridley Scott’s 1979 horror film Alien was described by Yoshio Sakamoto as a “huge influence” on Metroid after the game’s world had been created. The development team was inspired by the work of the film’s creature designer H. R. Giger and found his creations to be fitting for the Metroid universe. Set on the planet Zebes, the story follows Samus Aran as she attempts to retrieve the parasitic Metroid organisms that were stolen by Space Pirates, who plan to replicate the Metroids by exposing them to beta rays and then use them as biological weapons to destroy Samus and all who oppose them. 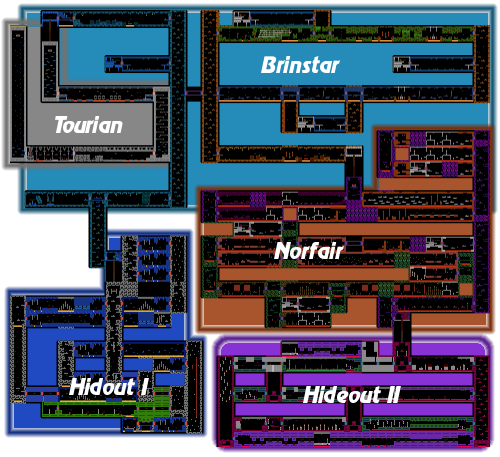