Friday the 13th is a survival horror video game developed by Atlus and published by LJN for the Nintendo Entertainment System. The game is an adaptation of the Friday the 13th movie series. Released in February 1989, it was developed as part of an aggressive expansion by LJN to focus on creating video games based on movie licenses.

The game is set at the Crystal Lake campsite which has been the scene of several recent murders. Jason has an unquenchable thirst for murder and mayhem that has become legendary for all who venture to Crystal Lake. The player takes control of a camp counselor who must destroy Jason once and for all. The goal is to defend yourself, the other camp counselors and protect the many young campers staying in the cabins while you track down and kill Jason.

Friday the 13th was released in North America exclusively in February 1989, as part of LJN’s focus on creating video games based on licenses. The game was not well received by the media upon release mainly due to its difficulty and frustrating gameplay. Traversing the map proved to be very challenging to gamers as it wasn’t intuitive. Coupled with very little in game guidance on what to do made for a very poor experience.

The game is now fondly remembered by many who invested the time to understand the game mechanics and did not give up due to a bad first experience. In 2013, the National Entertainment Collectibles Association (NECA) released an exclusive figurine of the video game-style Jason with the turquoise and purple color palette from the Nintendo Entertainment System game. In 2017 an unrelated Friday the 13th game was created by developer IllForce entitled “Friday the 13th: The Game” which incorporated a Retro Jason skin based on the Jason from the 1989 Nintendo Entertainment System game. 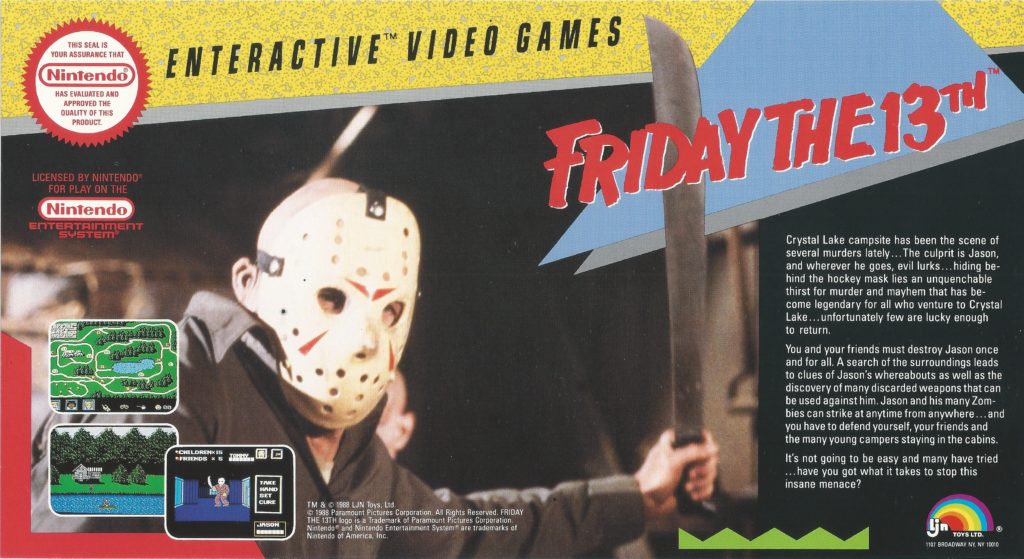