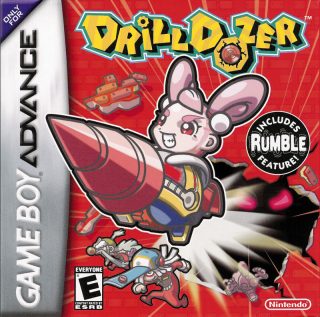 Drill Dozer is a platform video game developed by Game Freak and published by Nintendo for the Game Boy Advance.   The game first released in Japan in 2005 and was localized for a North American release by Nintendo of America’s Treehouse division.  When the game released in North America in 2006 it was one of two Game Boy Advance games to incorporate force feedback by including a rumble feature.

Players are placed in the role of Jill, the daughter of the Red Dozers gang leader.  Her farther was ambushed by the Skullkers, a rival gang who attacked the Red Dozers to steal the powerful Red Diamond.  The Red Diamond was a gift given to Jill from her now-deceased mother and she wants it back.  To retrieve the stolen Red Diamond, Jill mounts a powerful vehicle known as the Drill Dozer.  Players control Jill and her Drill Dozer through seventeen stages which include obstacles and puzzles which require the use of the Drill Dozer’s drilling capability in various ways to advance.

The game was first revealed at E3 2005 under the title Screw Breaker and was later renamed for its North American release in February 2006.  The game received favorable reviews after its release and was nominated for a multitude of awards from various video game media outlet.  Even though the game was well received by critics and was up for awards such as Game Boy Advance Game of the Year and Best Platformer the game did not sell very well, resulting in the European release being cancelled.

A full translation of the Japanese script was completed for European territories prior to the decision to cancel the European release of the game.  With the European localization completed prior to the game’s cancellation allowed Nintendo to easily bring the title to the Wii U’s European Virtual Console in January 2016.