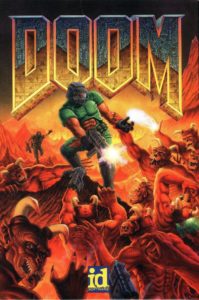 Doom is a first-person shooter video game developed and published by id Software for the PC. It is the first installment in the Doom series and is considered one of the pioneers for the first-person shooter genre. Gamers assume the role of a space marine, fighting his way through hordes of invading demons from Hell. The Union Aerospace Corporation has been experimenting with teleportation technology on Mars’ moons Phobos and Deimos. After early success, something goes wrong. It seems the scientists have opened a gateway straight to Hell. Phobos base is overrun with demonic creatures, and Deimos as a whole simply vanishes. A squad of marines is sent to Phobos, but all except one are quickly slaughtered. It falls to the surviving marine to grab some guns and strike back at the demons.

While the core team at id Software was developing Spear of Destiny, the prequal to their very successful game Wolfenstein 3D, John Carmack was hard at work developing a new game engine for their next game which was still undetermined at the time. Following the release of Spear of Destiny in September 1992, the team began to plan their next title. The team grew tired of working on the Wolfenstein series and wanted a fresh start. Tom Hall, co-founder of id Software and lead designer proposed making another game in the Commander Keen series, but the platforming style of the Command Keen series was a poor fit for Carmack’s fast-paced 3D game engine. 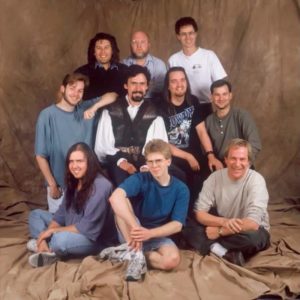 John Romero and Adrian Carmack, also co-founders of id Software wanted to create something darker in style. John Carmack then came up with his own concept of a game about using technology to fight demons. Carmack drew inspiration from the Dungeons & Dragons campaigns the team played, combining the styles of Evil Dead II and Aliens. The team agreed to pursue the Doom concept, and development began in November 1992. 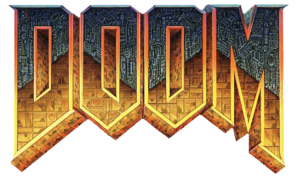 The original release of Doom was divided into three episodes, “Knee-Deep in the Dead”, “The Shores of Hell”, and “Inferno”. The first episode was comprised of nine levels which id Software distributed freely as shareware. It has been estimated that between 15 and 20 million people played the shareware release within the first two years of release. The full game which contained the other two episodes were sold via mail order. Offering one third of the game free of charge, hoping to gather enough interest for customers to purchase the full game was a bold marketing decision make by id Software at the time but proved to be successful with Doom reaching the heights of generating $100,000 per day.

With the success of Doom, id Software decided to release an updated version entitled Ultimate Doom containing an additional episode, “Thy Flesh Consumed”. The success of Doom did not stay strictly contained to the PC but eventually made its way into the living room receiving releases on numerous home video game consoles.

Along with its predecessor Wolfenstein 3D, Doom helped define the first-person shooter genre and inspired numerous similar games, known as “Doom clones”. It popularized multiplayer in first-person shooters with two different modes. Cooperative allowed players to move through the single player game together while Deathmatch pits players against each other in a competitive match where players blast each other to collect “frag” points for a kill and would re-spawn in a random location after being killed. Doom is one of the most significant games in video game history and is frequently cited as one of the greatest games of all time.

Doom Documentary - To Hell and Back 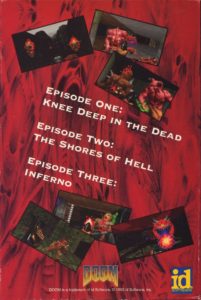 Back box art of Doom released for MS-DOS 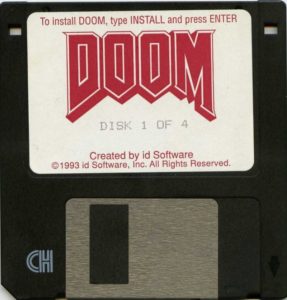 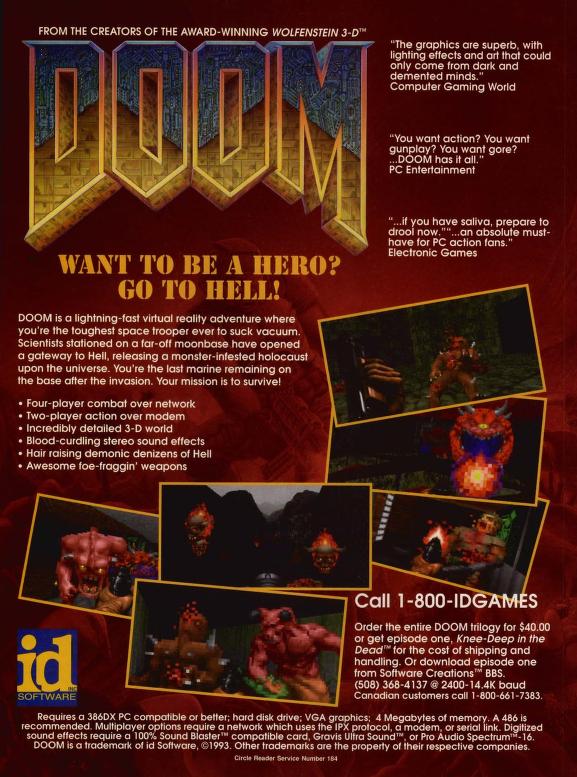