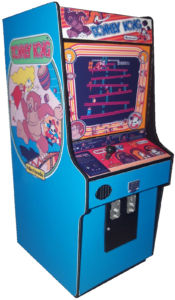 After three years of industry experience Nintendo began producing its own hardware in 1977 with the Color TV Game home console. Four versions of these consoles were produced each providing variations of a single game. Nintendo also ventured into the video arcade industry after having some previous experience with a few mechanical gun arcade style games. Nintendo had some small success in Japan and was determined to expand into the North American market and decided to open Nintendo of America.

Minoru Arakawa, president of the newly founded Nintendo of America placed a large order for Nintendo’s newest video arcade machine Radar Scope as the game was popular in Japan at the time. The game only stayed popular for a short period and by the time the game arrived in New York months had passed and the buzz surrounding the game had dissipated. The North American market was unimpressed leaving Nintendo of America stuck with thousands of unsold units. Faced with an imminent financial disaster Arakawa pleaded with Hiroshi Yamauchi, Nintendo’s CEO and his father-in-law to provide him with a new game which could be placed in the unsold Radar Scope units so that the hardware could be reutilized.

Hiroshi Yamauchi appointed the task of fixing the game to Shigeru Miyamoto one of Nintendo’s newest game designers. Shigeru Miyamoto determined that it would be best to build a new game from scratch instead of trying to tweak a game that was already not appealing to the North American market. Miyamoto designed Donkey Kong using the Radar Scope hardware and was able to convert the unsold units to be able to play his new game. Nintendo of America rebranded the arcade cabinets and launched Donkey Kong to see if it would rectify their financial issues, it went on to become a huge success and ended up saving Nintendo of America from bankruptcy.

Donkey Kong was more than just a game that saved Nintendo of America but laid the foundation for the platform game genre as well as visual story telling in video games. The game introduced Mario, the character that would ultimately become the face of Nintendo, the most popular and bestselling game character of all time and would become more recognizable around the world than Disney’s Mickey Mouse. The success of the game gave Nintendo faith in their young game designer Shigeru Miyamoto which allowed him the freedom to be creative and develop games that he envisioned rather than creating games that were thought up by executives within Nintendo. Shigeru Miyamoto went on to become one of the most well-known and successful game designers create many of Nintendo’s largest franchises such as Mario, Legend of Zelda, Star Fox, and Pikmin just to name a few. It could be argued that the creation of Donkey Kong is one of if not the most important video games to be created due to its immensive influence on the games industry.

The worldwide success of Donkey Kong didn’t mean it was all easy sailing for Nintendo as the success of the game drew the attention of Sid Sheinberg a seasoned lawyer and President of Universal City Studios. Sid Sheinberg suspected that the game might be a trademark infringement of Universal’s film King Kong. In April of 1982 Sheinberg met with Coleco whom licensed Donkey Kong from Nintendo for home game console distribution. Sheinberg threatened to sue over Coleco’s home version of Donkey Kong which was released on multiple consoles. After further review in May of 1982 Coleco agreed to pay royalties of 3% of the game’s net sale price to Universal which was worth approximately $4.6 million.

Universal then turned its focus to Nintendo threatening to sue but Howard Lincoln Nintendo’s attorney stood his ground refusing to give in to Universal’s demands. Universal brought Nintendo to court in June 1982 and announced its license with Coleco. Universal’s counsel argued that the names King Kong and Donkey Kong were easily confused, and that the game’s story infringed on their film. Nintendo’s counsel, John Kirby countered that Universal had themselves argued in a previous case that King Kong was in the public domain. In the end judgment was given in favor of Nintendo and Universal was order to pay damages and attorney fees.

The Development of Donkey Kong & Video Game Hall of Fame 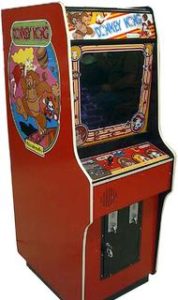 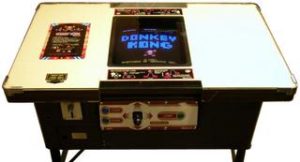 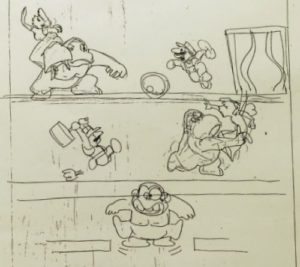 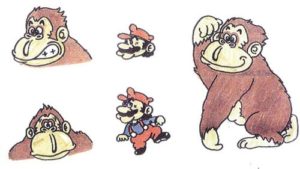 Sketch of Donkey Kong and Mario by Shigeru Miyamoto 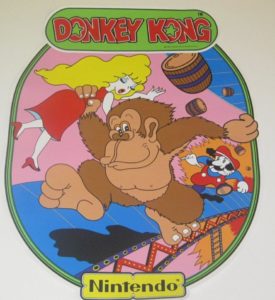 Side artwork from Arcade cabinet