Conker’s Bad Fur Day is a platform video game developed by Rare for the Nintendo 64.  The final design of the game was made for mature audiences however the original design intent did not begin that way but rather ended up evolving over the course of the game’s 4-year development.

The game was vastly different from any other Nintendo affiliated video games featuring graphic violence, alcohol, tobacco use, profanity, vulgar humor and mature sexual references.  As a result, unlike other Rare developed Nintendo 64 games such as Killer Instinct Gold, Blast Corps, GoldenEye 007 and Banjo-Kazooie Nintendo did not take on the role of publisher for Conker’s Bad Fur Day.  Rare would end up self publishing the game in North America and partnered with THQ to publish the game throughout Europe.

The conception of the game’s development can be traced back to early 1997 under the title Conker’s Quest.  Rare first announced the game at Electronic Entertainment Expo (E3) in June 1997.  At the time the game was quite different sporting a more kid friendly style similar to Banjo-Kazooie which would be release the following year in 1998.  Development continued on the game and when it was presented at the following E3 in 1998 it was revealed that the game’s title was changed to Twelve Tales: Conker 64.

Twelve Tales: Conker 64 had players controlling Conker in the action-based settings and Berri in strategy-based settings, with the possibility of two player split screen gameplay.  The game still targeted a family audience, featuring cute characters and colourful settings.  Rare was not happy with the game’s reception as it kept being regarded as cute and ultimately influenced the decision to give the game an overhaul. 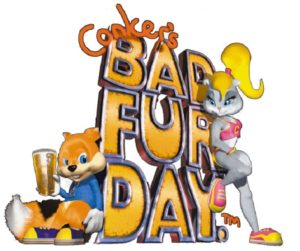 After a lengthy departure from any media coverage speculation began that the game had been cancelled.  In 2000 Rare announced that Twelve Tales: Conker 64 had been redesigned to have a mature theme and had once again been renamed, now known as Conker’s Bad Fur Day.  Mature humor was the key element of the game with aspects of the game being designed to attract an adult audience.

Over the course of the lengthy development which began in 1997, other members of Rare developed and released another game using the Conker character.   Released in 1999 for the Game Boy Color, Conker’s Pocket Tales was the first installment in the Conker series and made the upcoming Nintendo 64 Conker game a sequel of sorts.

As part of the Conker series, Bad Fur Day follows the story of Conker the Squirrel, who embarks on a quest to return home to his girlfriend, Berri, after a night of binge drinking with his friends.  Conker awakens with a terrible hangover and finds himself in an unfamiliar land.  Meanwhile, the Panther King, ruler of the land that Conker is lost in, finds that his throne’s side table is missing one of its legs and orders his servant, Professor Von Kriplespac, to solve the problem.

When Von Kriplespac suggests the use of a red squirrel as the fourth leg of his table, the Panther King sends his minions to capture one. During his journey home, Conker finds wads of cash scattered throughout the land and becomes sidetracked from his goal to make it back to his girlfriend. This leads him to get involved in a series of increasingly absurd and often dangerous situations, including having to recover a bee hive from enormous wasps, confronting a giant opera-singing pile of feces, and getting drafted into a war between grey squirrels and a Nazi-like group of teddy bears known as the Tediz.

The story continues to become more and more mature in nature as Conker progresses through his adventure leading the game to receiving a Mature rating from the ESRB.  The adult nature of the game limited Rare’s advertising campaign to running ads in adult only magazines such as Playboy and Maxim as well as late-night television timeslots for commercials.

Rare embraced a very risqué advertisement campaign and even partnered with Playboy to tour college campuses across the United States.  Rare had a Playboy Playmate host contest at each of the 20 campuses where dozens of students taking part in a completion with the winner taking home a Nintendo 64 console, a copy of Conker and a variety of other Playboy and Nintendo merchandise.  A grand prize was awarded to the highest scoring contestant from the 20 campus tour.  The game prize was a paid trip for two to the Playmate of the Year part hosted at the Playboy Mansion.

The game released in North America on March 5, 2001 to positive reviews from critics praising the game for its visuals and smart humour.  Rare continued forward with their risqué adverting campaign making good use of the timing of the game’s Spring release by hosting Spring Break parties.   Rare focused on setting up nightly contest and giveaways at the best-known clubs in the most popular spring break destinations.

Large Conker banners were setup in the night clubs asking partygoers if they want tail as staff invited students on Spring Break to play their latest game to become the “King of Tail”.  Multiple stations were setup for patrons to play Conker’s Bad Fur Day while Conker merchandise was handed out to people in line waiting for their chance to play.  Scattered around the club were copies of Conker’s Little Black Book consisting of a collection of cartoon advertisements for the game and Conker branded condoms.

T-shirts were given away to anyone who played the game sporting the phrase “Got Tail?” on the front and the Bad Fur Day logo on the back.  Aside from having a chance to play the newly released game and getting some unique Conker merchandise the main event of each night was the “King of Tail” contest.  The contest consisted of one-inch square conker tattoos handed out to people that played the game, the longer you play the more tattoos you could accumulate. The challenge was to fit as many of the tattoos as possible on your body and who ever had the most covering their body at the end of the night would win a Nintendo 64 and a copy of Conker.

Although the game was praised upon release, received positive reviews and had a very elaborate advertising campaign the game sold well below expectations.  The poor sales were partly due to the limited advertising options available and being released towards the end of the Nintendo 64’s life cycle.  Even though the game did not sell as expected it did develop a cult following and is very well regarded by gamers.  A remake of the game was made after Microsoft acquired Rare and released as “Conker: Live & Reloaded” for the Xbox in 2005.  The game was also included as part of the Rare Replay compilation for the Xbox One.

The Making of Conker's Bad Fur Day & Did you Know Gaming 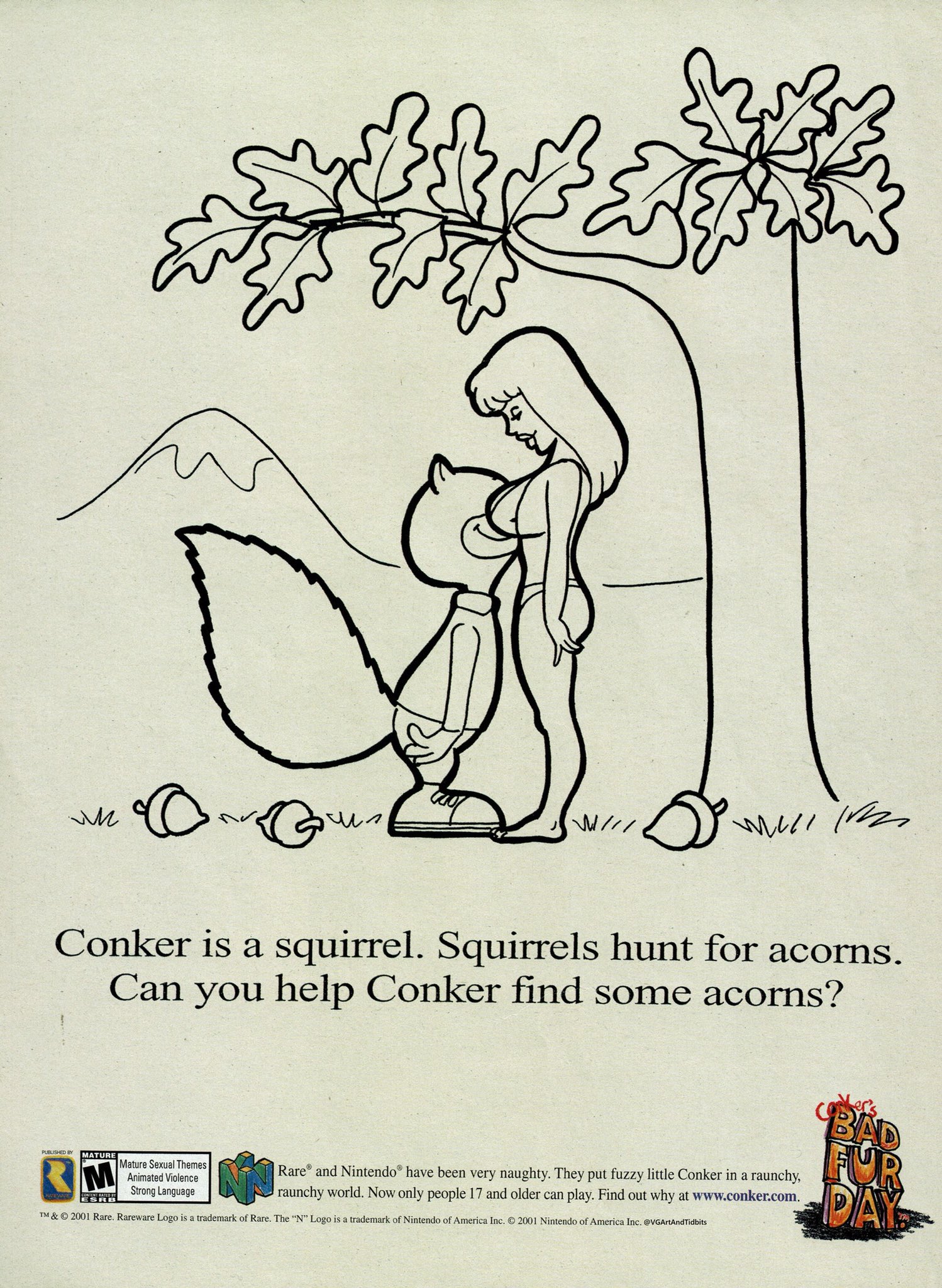