Chip ‘n Dale: Rescue Rangers is an action platforming video game developed and published by Capcom for the Nintendo Entertainment System.  The game is based on the popular Disney animated TV series of the same name and is the second of many Disney license games developed by Capcom in the early 1990s.

Developed after the release of Capcom’s first Disney license game, DuckTales, the game was produced by the same producer, Tokuro Fujiwara.   Fujiwara, who developed the critically acclaimed DuckTales had also previously worked on other hugely successful games for Capcom such as Mega Man 2 and Ghosts ’n Globlins.

The game begins with the Rescue Rangers on a mission to retrieve a missing kitten for a girl named Mandy.  The team splits up to look for clues and investigate the area.   As Gadget proceeds a head to scout the area, she is kidnapped by Fat Cat while Monterey Jack and Zipper are investigating sightings of strange mechanical dogs and Chip and Dale were attacked by a crazed robot while investigating a laboratory.

After Chip and Dale defeat the crazed robot, Fat Cat appears and reveals that the missing kitten was just a distraction so that he could kidnap Gadget to force her to work for him.  Fortunately, Gadget was able to contact Chip and Dale while kidnap by using a wireless phone that she built and also sent a map to them via carrier pigeon.

Players take control of Chip and Dale in their quest to rescue Gadget from Fat Cat.  Using the map provided by Gadget players must travel through various stages to reach Fat Cat’s casino where Gadget is being held captive.

Upon release the game proved to be another commercial success for Capcom selling 1.2 million copies worldwide.   Due to the success of the game Capcom decided to port the game to the Nintendo PlayChoice-10 arcade system.   Capcom released a sequel, Chip ‘n Dale: Rescue Rangers 2 in 1993 but was far less successful due to its late release near the end of the Nintendo Entertainment System’s life cycle, 2 years after the release of the Super Nintendo.

The game was included in a compilation along with other Disney games in The Disney Afternoon Collection released in 2017 for the PlayStation 4, Xbox One and PC.

An in depth look at Chip 'n Dale: Rescue Rangers 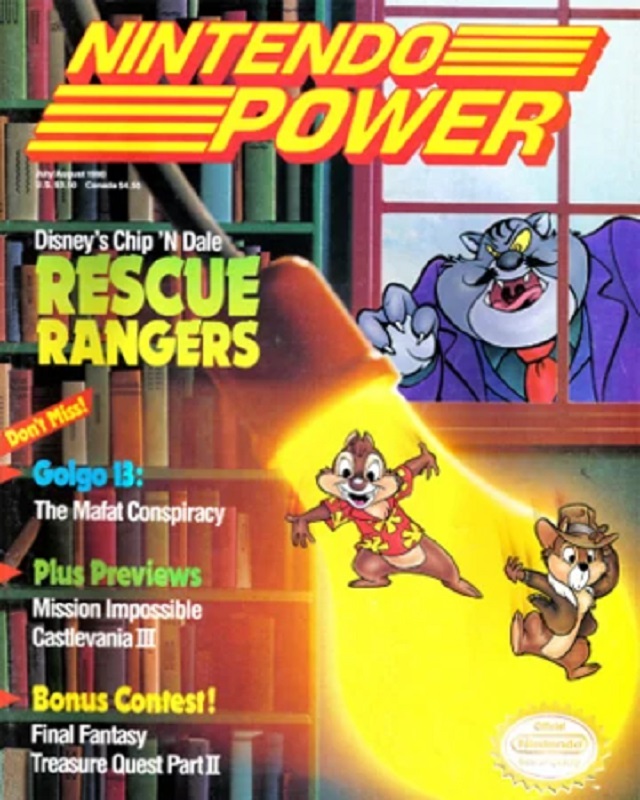