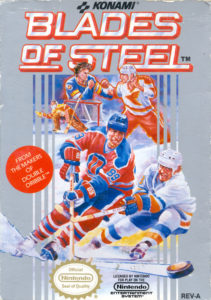 Blades of Steel is a hockey arcade video game developed and published by Konami in 1987 and for the Nintendo Entertainment System in 1988. The game is renowned for its fast-paced game play and for its fighting sequence.

The game features eight teams, Los Angeles, New York, Montreal, Vancouver, Chicago, Toronto, Minnesota and Edmonton which can be played in one of two modes, Exhibition or Tournament. Players can select their level of difficulty when playing single player mode by selecting Junior, College or Pro. Selecting exhibition mode allows players to play a single game against another player or the computer. Selecting tournament mode launches an eight team three round playoff tournament were teams compete to win the Cup.

The game gained notoriety for its in-game fighting sequence which is initiated when two players from opposing teams bump into each other three times in a row without hitting another player. The two players will then engage in a pre-fight confrontation where players can choose to fight if they wish. If players choose to fight, then a voice yells fight, and a fighting screen is displayed by zooming in on the two opponents. During the fight players are provided a health bar of five hits and given the ability to punch high, punch low, block high and block low. The loser is the first person to get hit five times and is given a penalty while the winner is not punished, creating a power play opportunity of 5-on-4 for the winner’s team.

Konami implemented a mini game into the second intermission of the hockey game which acted as an in-game advertisement for other Konami games. The mini-game is a space shooter where a small spaceship is trying to destroy a much larger spaceship and closely resembles Gradius. When the mini game comes to an end advertisements for Contra and Jackal are presented. 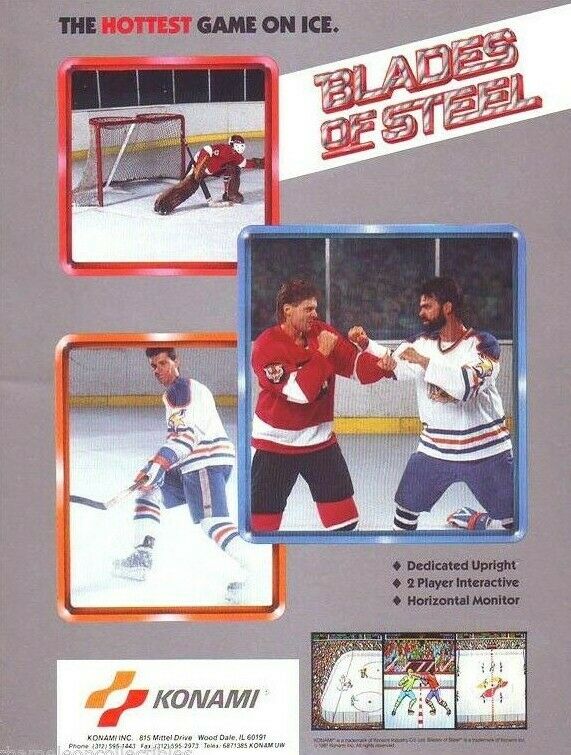