Battletoads is a platform beat ‘em up video game developed by Rare and published by Tradewest for the Nintendo Entertainment System and later ported to various other consoles.   Based on the adventures of three humanoid toad warriors who form a group known as the Battletoads, the game is the first installment in the Battletoads series.

Two of the toad warriors, Rash and Zitz embark on a mission to defeat the evil Dark Queen on her planet and rescue their kidnapped friends.  The Dark Queen kidnapped the third member of the group, Pimple and Princess Angelica.  Players take control of Rash and or Zitz in multiplayer mode to battle across 12 levels in order to save their friends.

Originally titled Amphibianz in the early stages of development the art style of the game was designed similar to Disney-themed video games however as the game gradually became more violent in nature the game underwent design changes.  The characters were designed with mass marketing appeal in mind which would allow Rare to be able to produce merchandise in mass quantities if the game proved to be successful.  They were looking to capture and capitalize on their characters appeal much like the recent Tim Burton’s Batman film did with the release of merchandise such as action figures, clothing, bedsheets, etc.

Upon release the game received positive reviews with critics praising the games’ graphics and the variety of gameplay that the developers incorporated into the game.   To set themselves apart from other beat ‘em up games of the time Rare incorporated other gameplay elements into the game such as platforming, racing, climbing, strategy and vehicle-based obstacle courses.  Due to the game’s extreme difficulty almost all subsequent ports of the game went to varying measures to tone down the difficulty level to make the game more accessible to casual gamers.  It is believed that the sudden difficulty spike was intended to influence the purchase of the game opposed to renting the game from a video game rental company.   The theory was if the game was more difficult then it would take longer to complete resulting in consumers being more likely to purchase the game instead of renting it.

The game’s initial success let to the game being ported to the Sega Genesis / Mega Drive and Game Gear in 1993 followed by the Amiga and Amgia CD32 in 1994.  A spin-off of the game was released for the Game Boy however even though it used the same box art and title it is an entirely different game.  Rare continued to develop upon the franchise by releasing multiple sequels in the early 1990s and worked with DIC Entertainment to create a pilot episode of an animated cartoon in hopes to have the show picked up as a full series.  The game was included in the 2015 release of Rare Replay, a compilation containing 30 of Rare’s most popular and influential games from their 30-year history in game development.

The making of Battletoads 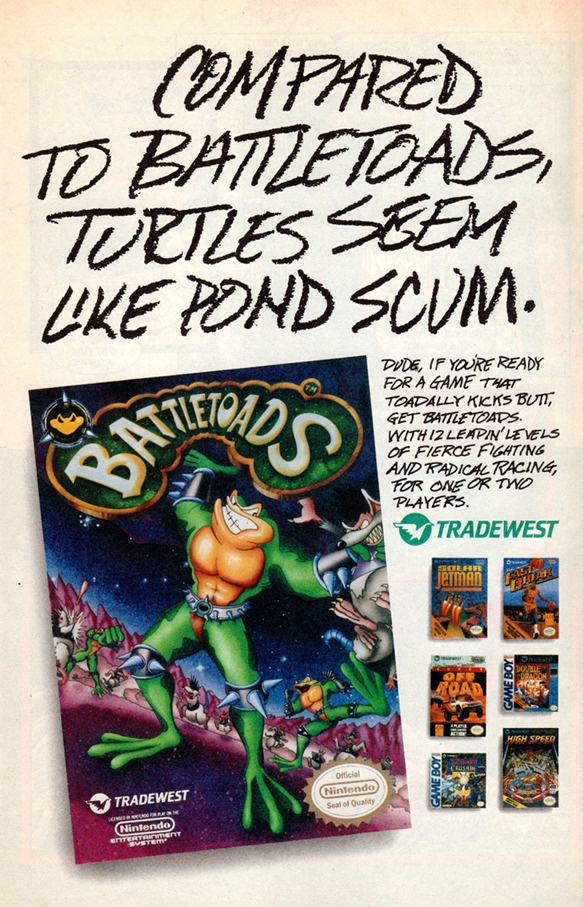