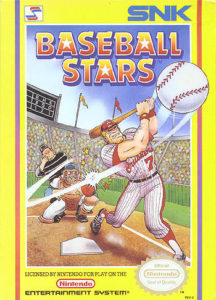 Baseball Stars is a sports video game developed and published by SNK for the Family Computer and Nintendo Entertainment System video game consoles. First released as a 2-player PlayChoice-10 arcade game and later released on home consoles it is the first installment in the Baseball Stars series.

SNK incorporated a battery backup into the cartridge of the video game which was the first baseball game to have this feature and the first sports game on the Nintendo Entertainment System to have a battery backup. This new ability allowed for a wide range of new features that other baseball games could not offer on the Nintendo Entertainment System. It allowed players to create teams, manage the league, play a season and have the game store player statistics.

It also was the first sports game on the Nintendo Entertainment System to have a create a player feature, providing gamers the ability to name their roster as well as their teams. The game was more realistic than any previous baseball game, acting almost like a baseball simulator. The game introduces an element in which gamers would earn money for winning games, allowing for the team to be managed by using the earned money to purchase upgrades to players abilities on the roster or could be used to purchase new players (Rookies, Veterans and All-Stars).

The game can accommodate up to 14 teams, eight of which came preconfigured and six more teams that can be created. The original eight teams consisted of the American Dreams, Ninja BlackSox, Brave Warriors, Japan Robins, World Powers, Ghastly Monsters, Lovely Ladies and SNK Crushers, all of which can not be edited or changed.

With all the new incorporated features the game became a major hit in many countries around the world. Baseball Stars was a critical success, often referred to as the best baseball game on the Nintendo Entertainment System. The success of Baseball Stars spawned the creation of five sequels establishing a franchise series for SNK.