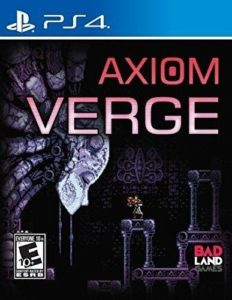 Axiom Verge is a metroidvania style video game that was solely developed by Tom Happ as an independent project. Happ was an engineer at Petroglyph Games and began development of Axiom Verge as a hobby after work and on the weekends. While at Petroglyph Games he worked on games such as End of Nations, NFL Street and the Tiger Woods PGA Tour series.

Happ was the sole designer, artist, programmer and composer of the game which he began working on in March 2010. An alpha build of the game was developed, and a public reveal trailer was made available in April 2012. Originally expected to be released for the PC and Xbox 360 in 2013 but the game was ultimately delayed. The game was selected for Sony’s Pub Fund, which offers cash and support to independent developers. With development receiving a financial boost from Sony this allowed Happ to bring the game to the PS4 and PS Vita and with the added support provided the opportunity to launch first on the PS4.

The game released with widespread praise from critics on March 31, 2015 on the PlayStation 4 in North America and on April 20, 2015 across Europe, followed by a worldwide release on the PC on May 14, 2015. Axiom Verge seen enough initial success from launching on the PS4 and PC that Tom Happ was able to continue expanding on what platforms he could offer the game on.

In February 2017, Tom Happ formed a partnership with game distributor BadLand Games to publish retail copies of Axiom Verge in both a standard version and a special limited-edition version called Axiom Verge: Multiverse Edition. The Multiverse Edition include a physical copy of the game, a deluxe booklet with developer commentary and art, a double-sided poster and a making-of documentary on Blu-Ray. The Nintendo Switch version of the Multiverse Edition also included an exclusive Soundtrack on CD.

During the 2019 Indie World presentation, Thomas Happ Games revealed that a sequel was in development. The reveal trailer announced that Axiom Verge 2 would be released in Fall 2020.

A Detailed Look At Axiom Verge

Indie Games Searchlight is a YouTube channel that takes an in depth look at lesser known games outside the mainstream.