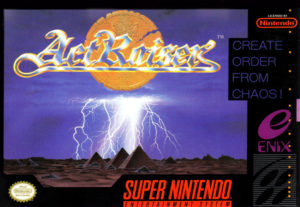 ActRaiser is a platforming video game with city-building simulation elements developed by Quintet and published by Enix for the Super Nintendo. The game was one of the early Super Nintendo releases and stood out for combining traditional side-scrolling platforming with an urban planning god game section creating a unique experience.

Players take control of a godlike being known as “The Master” and must save the world from evil. Awakening several hundred years after being defeated in battle by Tanzra and his six lieutenants, the Master discovers that he has lost his powers due to the lack of belief in him. During his absence, Tanzra divided the world into six lands, one for each of his lieutenants and turned the people evil.

As the game progresses, the Master defeats the lieutenants and starts to recover his powers by rebuilding the civilizations of his people and communicating with them through prayer. Once all lieutenants have been defeated, the Master sets his sights on Tanzra to defeat him and restore piece to the land.

The game sold modestly with 620,000 copies sold worldwide and developed a cult following among a subset of gamers. Among many things, the game was recognized for its score, which was developed by Yuzo Koshiro, winning Best Music of 1992 by Electronic Gaming Monthly. Quintet developed a sequel which released in 1993 for the Super Nintendo. However, ActRaiser 2 did not include any simulation elements like the original game.