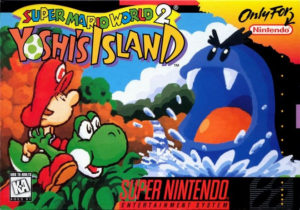 The game was developed by EAD, directed by Takashi Tezuka, produced by Shigeru Miyamoto and music composed by Koji Kondo. While working on the Super Mario World, Miyamoto had the idea to make Yoshi the series protagonist. He did not care for the previous Yoshi games but seen the potential in the character. Miyamoto felt that he could do something more authentic with the Yoshi character.

The Nintendo marketing team rejected Miyamoto’s original concept for Yoshi’s Island as the graphics were too traditional matching the previous Super Mario World’s style, rather than using pre-rendered graphics which was introduced by Rare in the Donkey Kong Country series. Miyamoto would evolve the artistic style of the game to have cartoonish hand drawn visuals with a crayon style. Nintendo’s marketing department accepted the revised concept which was achieved by artist drawing graphics by hand, scanning the drawings and approximating the placement of them pixel by pixel.

Yoshi’s Island was in development for four years, which allowed the development team to incorporate many new ideas and features. They incorporated an extra microchip into the cartridge of the game to support additional features that were otherwise not possible by using the Super Nintendo’s hardware alone. The Super FX chip allowed for in game rotation, scaling and other sprite-changing special effects.

Following the success of Super Mario World 2: Yoshi’s Island, Nintendo developed Yoshi’s Story for the Nintendo 64 which starred Yoshi without the involvement of Mario. Over the years Nintendo would expand on the Yoshi series making it a mainstream franchise that would see games in the series released for almost all future Nintendo hardware.