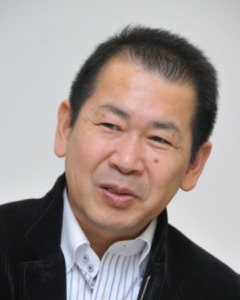 Yu Suzuki is a Japanese video game designer, producer and programmer who created some of Sega’s most popular arcade experiences in the mid 1980s and early 1990s.  Suzuki spent 26 years working at Sega and is most notable for the games he created while working for Sega’s AM2 division.

Suzuki joined Sega’s Studio 128 development team in 1984 to focus on creating innovated video game experiences.  It is here where Suzuki programmed Hang-On, Sega’s first “Taikan” game, a Japanese term that was coined by Sega during the 1980s to describe their experience based deluxe cabinets. The popularity of Hang-On inspired Sega to create a line of “Taikan” games such as Space Harrier, Enduro Racer, OutRun, Super Hang-on and After Burner.  As Sega continued to revise how the company was structured Studio 128 became Sega R&D8 which then became the much more widely known division, Sega AM2 in the early 1990s.

During the mid 1980s while working at Studio 128 Suzuki and team developed some of the most popular full body immersion-based video games.   With the transition to Sega AM2 Suzuki was promoted to producer where he continued to improve the immersion of video games with the team’s first 3D computer generated game, Virtua Racing.  Suzuki became the public face of AM2 for the following decade where he helped create and promote games such as Virtua Fighter, Daytona USA, Virtua Cop and Fighting Vipers.

After the release of Virtua Fighter 3 in 1996, Suzuki’s focus shifted away from arcade games for the chance to develop a potential ground-breaking concept for Sega’s new home console that was in development, the Dreamcast.  Wanting to create a longer experience game Suzuki’s concept for an action-adventure game did not fit as an arcade game.  Written, directed and produced by Suzuki, Shenmue became one of Sega’s most ambitious video games and a series that Suzuki would continue to be involved with even after his departure from Sega in 2009.