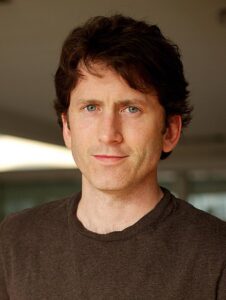 Todd Howard is a video game designer, director and producer best known for the Fallout and The Elder Scrolls series.   He has been employed by Bethesda since 1994 and currently serves as director and executive producer at the game studio.

Inspired by the 1980s role-playing games Wizardry and Ultima III: Exodus, Howard decided to pursue a career in the video game industry while attending the College of William & Mary in Williamsburg, Virginia.   Howard’s major was unrelated to video games as he was studying finance and business however his passion for video games drove him to apply for positions with Bethesda numerous times.

On his daily commute to College he would pass by Bethesda Softworks office and during his senior year of College he decided to pay them a visit in search for a job opportunity.  Upon his visit he was informed that a post secondary education was a prerequisite for employment at Bethesda and that he would need to finish school before being eligible for a position at their company.  After graduating, he went back to Bethesda in search for a job but due to a lack of open positions was unable to secure a job with them.

Howard was able to find work at a smaller game company in Yorktown, Virginia which gave him the opportunity to visit several conventions such as the Consumer Electronics Show.  He continued to pursue Bethesda while attending the conventions and was eventually recruited by Bethesda Softworks in 1994 as a producer.  His first project with the game studio was as producer and designer for The Terminator: Future Shock in 1995 followed by the role of designer on SkyNET in 1996.