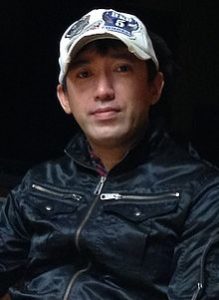 Shinji Mikami is a Japanese video game designer, director and producer best known for the Resident Evil series. Mikami joined Capcom in 1990 as a junior game designer where he worked on multiple Disney licensed games for the Game Boy and Super Nintendo before being assigned as the director of Resident Evil for the PlayStation.

Resident Evil was initially conceived by Tokuro Fujiwara as a remake of an earlier Capcom game released on the Famicom named Sweet Home. Fujiwara entrusted Mikami with the project as he felt that he understood what would be considered frightening and be able to set the appropriate atmosphere for the new survival horror game. Resident Evil released after 3 years of development on March 22, 1996 and became one of the PlayStations first successful titles.

In 2007, Mikami joined Seeds Inc, now known as PlatinumGames which was composed of several of his former Capcom Colleague including Hideki Kamiya, Atsushi Inaba, Yuta Kimura, Nao Ueda, Mari Shimazaki and Masami Ueda. He worked with the team as a contract employee on the development of Vanquish while establishing his own game studio “Tango”.

On October 28, 2010 ZeniMax Media, the parent company of game publisher Bethesda Software, acquired Tango Gameworks. Mikami stated that his new project, “The Evil Within” would be a true survival horror game, one in which the player confronts and overcomes fear as he was disappointed by recent survival horror games becoming action horror games. Mikami produced The Evil Within 2 and is now working on a new IP “Ghostwire: Tokyo”.

GameSpot is all about video games and the gamers that love them. They live, eat, breathe and probably do lots of other things with video games that shouldn’t be allowed in polite society.