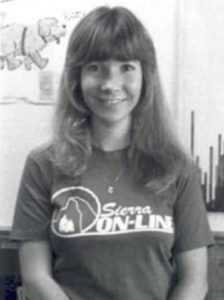 Williams’ first venture into video games began in 1979 with the creation of the first adventure game to incorporate graphics, Mystery House. Prior to Mystery House all previous adventure-based games were text only. Williams’ follow up game Wizard and the Princess added color graphics, another first for the industry. The success of Williams’ games helped establish On-Line Systems, a company she co-founded with her husband Ken Williams.

Over the course of the next couple of years Roberta continued to write and design games while establishing a very successful development and publishing company. From 1980 to 1983 On-Line Systems grew from having one employee, Ken’s brother John to over 130 employees. In 1982 the company was renamed to Sierra On-Line and the company moved to Oakhurst, California.

IBM approached Sierra to create a game to showcase their new computer the PCjr. Accepting IBM’s offer, Roberta Williams created a story featuring classic fairy-tale elements. Her game concept includes animated color graphics, a pseudo 3D-perspective where the main character is visible on the screen, a more competent text parser that understands advanced commands from the player, and music playing in the background through the PCjr sound hardware.