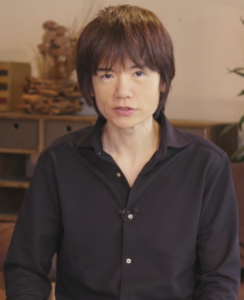 Masahiro Sakurai is a Japanese video game director and game designer at Sora Ltd., which was founded by Sakurai in 2005. Sakurai is well known as the creator of Kirby and Super Smash Bros. series with his involvement with Nintendo stretching back to 1992 while he worked at HAL Laboratory.

Sakurai got involved in the gaming industry at a very young age. He began working for HAL Laboratory, where he created the character Kirby at the age of 19 and directed his first title, Kirby’s Dream Land. Masahiro Sakurai worked at HAL Laboratory until 2003. After his departure from HAL Laboratory he began working with Q Entertainment on the creation of Meteos for the Nintendo DS in 2005.

Nintendo owned 72% of Project Sora with the other 28% being owned by Sora Ltd. This secured Nintendo’s partnership with Masahiro Sakurai and allowed for Nintendo to produce exclusive content under Sakurai’s direction. Project Sora revived the Kid Icarus franchise with the creation of Kid Icarus: Uprising for the Nintendo 3DS. Project Sora was closed at the end of the development of Uprising on June 30, 2012 and Sakurai agreed to continue leading the development of the Smash Bros. series.