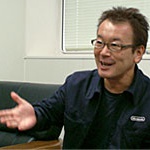 Kazunobu Shimizu is a Japanese video game designer at Nintendo. Shimizu joined Nintendo in 1986 where he designed Zelda II: The Adventure of Link, two Famicom Golf games and two Famicom Grand Prix games. The move from the Famicom to the Super Famicom gave Nintendo the ability to be more flexible with their game design. Shimizu started designing and directing the futuristic racer, F-Zero.

Shimizu worked on the graphic and course design for F-Zero for the Super Famicom while also handling the overall direction of the game. He would later direct other title such as Star Wars Episode I: Racer and F-Zero: Maximum Velocity. Shimizu no longer appears to be involved directly in game design but rather focuses on hardware development projects.