Studio 128 was an internal development group that was formed when Sega’s oldest video game development team Sega Production and Engineering Department was split into several groups to expand their service offerings as well as to allow each team to concentrate on particular products and services.  Sega Production and Engineering Department created many of Sega’s electro-mechanical arcade games in the 1960s and 1970s, but the division did not solely focus on the creation of video games.

The precise nature of Studio 128 is not fully known as much of its works were kept secret from the rest of the company.  The division was an extension of Sega but seemed to operate as an independent studio.  The Studio operated in their own small building a short distance from Sega’s main office.  The extent of the studio’s secrecy reached unprecedented heights when overzealous programmer Masahiko Kobayashi once stopped Sega’s president Hayao Nakayama from entering the facility and refused to let him know what the team was working on.

The studio employed between 5 and 10 people who worked on Sega’s cutting-edge “Taikan” games, a Japanese term that was coined by Sega during the 1980s to describe their experience based deluxe cabinets.  The group was led by Hisashi Suzuki who previously led the Sega Production and Engineering Department from 1965 to 1984.  Under the management of Hisashi Suzuki, Yu Suzuki would work alongside a small team of developers to create many of Sega’s popular arcade hits from the 1980s.  It is here where Yu Suzuki programmed Hang-On, Sega’s first “Taikan” game. The popularity of Hang-On inspired Sega to create a line of “Taikan” games such as OutRun, After Burner, Power Drift and G-LOC: Air Battle. 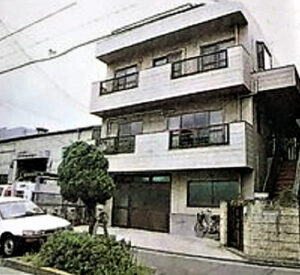 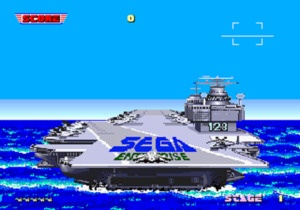 Due to the secrecy that surrounded the studio it makes it difficult to discern its history.  The development team were not directly credited in any of Sega’s games, something that unfortunately was commonplace in the 1980s.   The only in game reference to the group existence can be found at the beginning of After Burner and After Burner II as the aircraft takes off from an aircraft carrier labelled “128”.

Sega continued to refine the way the company was restructured to strengthen and optimize their video game divisions leading to Studio 128 being incorporated into the same building as the other development teams and renamed Sega R&D8.   As Sega continued to revise how the company was structured R&D8 became the much more widely known division, Sega AM2 in the early 1990s.