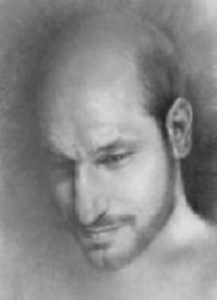 Tom duBois is an illustrator who created the majority of Konami’s cover art for their games between 1988 and 1994.  Tom attended the American Academy of Art in Chicago in the late 1970’s and prior to his involvement with video games he created backgrounds for Cap’n Crunch commercials in the late 1980’s.  Tom’s involvement in video games began when he was approached by his cousin Dave in 1988.

Dave was the representative of a photographer who was in discussions with the ad agency Michael Meyers & Associates.  During discussions regarding potential opportunities for photography work the advertisement agency mentioned that they just signed a new client that was looking for an illustrator.  They were looking for a local illustrator that could show them some samples and Dave suggested Tom.   Dave contacted Tom to ask if he was still creating the wild and creative drawings that he remembered while growing up.  Tom confirmed that he was and even had recently completed drawings that could be used as samples.

The sample art that Tom provided to Dave was an exaggerated over the top football scene and the executives at Michael Meyers & Associates loved it.   It was exactly the type of illustration work they were looking for and that they wanted Tom to work on something for their brand new Japanese based client, “Konami”. 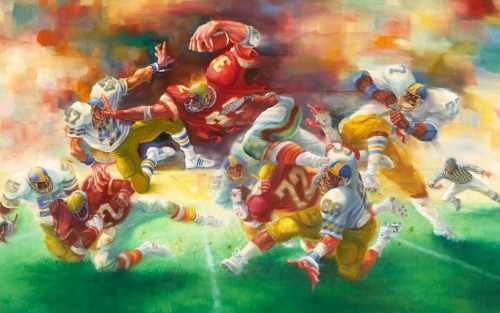 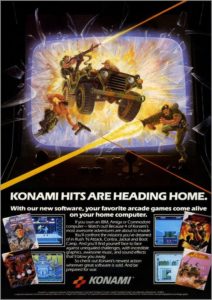 The first assignment that was given to Tom for the Konami account was for a Konami ad that would be used in magazines and comic books.  The advertisement was not for a single game but for four existing arcade games that were being ported to the home computer.   The ad featured Rush ‘N Attack, Contra, Jackal and Boot Camp, all of which had a military type style of gameplay.   Tom was given the job on Friday and the team needed it completed by Monday to meet printing timelines.  To make the single ad relevant for all four games Tom designed an army jeep smashing through a television screen with soldiers in the heat of battle.

Konami was happy with the ad and a second magazine advertisement job was given to Tom, this time for Metal Gear.  The metal gear ad would contain the full list of items that could be found in the game with descriptions.   Utilizing the in-game pixel art of the items, Tom recreated each item to have much more detail.  Konami was very please with the design details of each item used in the ad and was comfortable using Michael Meyers & Associates for higher profile work.  This led to Tom receiving work from the advertisement agency on behalf of Konami to create cover art used on their games and to create artwork which would be used for the labels placed on the game cartridges. 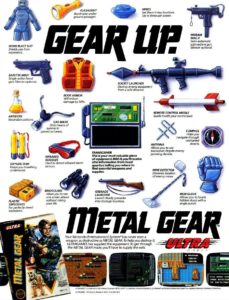 Work started to poor in from Konami which kept Tom very busy.  His first two jobs were to illustrate box cover art for the DOS based game A-Jax and Blades of Steel for the Nintendo Entertainment System.  In order to create the cover art for Blades of Steel, Tom wanted to reference some pictures of hockey players to get an idea of body movement and positioning.  Tom created four drafts as a proof of concept for Konami to select from as he wasn’t given any direction on how the cover should look or feel.   Unfortunately, they selected a draft in which Tom referenced a photo from Sports Illustrated, which ended up being a very costly mistake for Tom.

The Sports Illustrated photo of Wayne Gretzky and Tomas Jonsson battling for puck possession was used as a reference for the lower half of the game’s box art while the top half was an original design.  Tom made changes to the referenced portion by changing the players faces, uniforms, logos, numbers, etc. but kept the body positioning to reference really hockey movement.  Unfortunate for Tom the positioning of the players was so identical to the photograph that the photographer wanted payment for the use of its likeness.

The photographer seen the cover art of Blades of Steel when it was released and immediately recognized the imagery.  The photographer who took the picture informed Sports Illustrated who immediately contacted Nintendo.  Nintendo pointed Sport Illustrated to Konami who then went to their advertisement agency, Michael Meyers & Associates and ultimately Tom.   The agency was on the hook to pay Sports Illustrated $15,000 for the use of the imagery in the photo however the agency informed Tom that he had to pay it if he wanted to continue to work with them and receive work from their clients such as Konami.  The ad agency negotiated the fee down to $10,000 and Tom took the financial hit but would continue to get steady work from Konami for another six years. 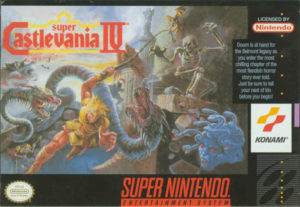 Tom continued to receive a massive amount of work from Michael Meyers & Associates for the Konami account between 1988 and 1994.   The work entailed the creation of magazine ads, posters, artwork for game labels and cover art for game boxes.  Over the next six years Tom would create some of the most iconic cover art for the 8-bit and 16-bit eras of video games.  Handling some of Konami’s most popular games, Tom’s work can be seen on the cover of games such as Castlevania III: Dracula’s Curse, Super C, Super Castlevania IV, Contra III: The Alien Wars, Turtles IV: Turtles in Time, Turtles: The Hyperstone Heist, Lethal Enforcers and Castlevania: Bloodlines to name a few.

Konami would end up partnering with another advertising agency in 1994 placing an end to a long line of work in the video game industry for Tom.  Tom’s last job from Michael Meyers & Associates for the Konami account was for the cover art of the 1994 release of Lethal Enforcers II: Gun Fighters.  After Michael Meyers & Associates lost the Konami contract Tom took a hiatus from working on anything video game related.

Post working on Konami released projects, Tom carried on illustrating for Disney, creating limited edition prints from their film catalogue before working for an art publisher creating biblical themed prints.  Tom has spent many years working within the Christian community illustrating for faith journals and after a 25-year hiatus from the video game industry he was contacted by Limited Run Games to create the cover art for Bloodstained: Curse of the Moon Classic Edition, a spiritual successor to Castlevania.  Around the same time Konami reached out to Tom to create the cover art for the 2019 release of Contra: Rogue Corps.  The day one edition of the game included a horizontal reversible cover artwork that was created by Tom. 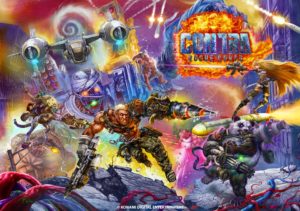