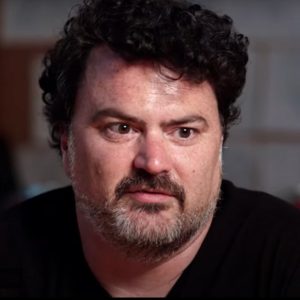 Tim Schafer is a video game designer, programmer and writer who spent a decade working at LucasArts before founding his own game studio, Double Fine Productions.   Schafer applied for a job at Lucasfilm Games while attending computer science at UC Berkeley.  The job opening was for a programmer that could also write game dialog.

Lucasfilm Games conducted a preliminary phone interview with Schafer as part of their screening process. David Fox conducted Schafer’s interview in which Schafer felt that he made a disastrous mistake that would have costed him the job.  During the interview Schafer mentioned that he was a fan of the Lucasfilm developed game Ballblaster.  Fox informed him that the game was called Ballblazer and that Ballblaster was a knockoff pirated version of their game.  Despite the slip up Fox encouraged Schafer to proceed and submit his resume for further consideration.

Schafer feeling that he already lost the job and had nothing to lose decided to make and submit a unique comic style resume to standout from other applicants.  Schafer created a comic of himself applying for and getting the position at Lucasfilm Games drawn as a text adventure game.  His determination paid off and was hired by Lucasfilm Games in 1989.

His first position with Lucasfilm was as a “scummlet”, named after Lucasfilm’s game engine SCUMM.  The role called for a programmer to help implement features and ideas proposed by the lead game developers into the SCUMM engine.  Schafer was taught along with Dave Grossman and two other new hires as part of a “SCUMM University” training by Ron Gilbert, the programmer of Ballblazer and the creator of Maniac Mansion.

Some of his first assignments were to assist with playtesting “Indiana Jones and the Last Crusade: The Action Game” and implement the Nintendo Entertainment System version of Maniac Mansion.  In 1988 Ron Gilbert created a draft story which involved pirates that he pitched to Lucasfilm Games management as a series of short stories.  Gilbert’s proposal was warmly received but had to be placed on hold until a few games that were already in the pipeline were finished.  Development of “Indiana Jones and the Last Crusade: The Graphic Adventure” wrapped up in 1989 freeing up the team to start working on Gilbert’s concept known internally under the working title Mutiny on Monkey Island.

In order to flush out the story and characters, Gilbert brought Tim Schafer and Dave Grossman onto the project as writers.  Gilbert’s vision was for the story to have a comedic tone and felt that Schafer and Grossman’s personalities were perfect fit for the game.  As work began Gilbert discovered that although both Schafer and Grossman’s personalities were a perfect fit for the game their writing styles were vastly different and did not form a cohesive whole.    Grossman had a dry, sarcastic sense of humor while Schafer’s style was more in your face.

In order to effectively mesh both writing styles Gilbert assigned them to different characters and sections of the story depending on what type of comedy was more fitting.  Along with the creation of the story and characters Gilbert, Schafer and Grossman also handled the programming for the game.  Schafer and Grossman wrote most of the character dialogue while programming the game resulting in much of the content being improvised.

LucasArts were confident in Schafer and Dave Grossman’s ability after their involvement with The Secret of Monkey Island and Monkey Island 2: LeChuck’s Revenge and assigned them to lead their first game project.  The duo co-designed Day of the Tentacle, a time-travel comedy adventure and the sequel to Maniac Mansion.  Following the completion of Day of the Tentacle Schafer would lead his first solo project, Full Throttle.   The 1995 biker adventure exceeded expectations and sold over a million units.

Schafer’s next project was larger in scope then his previous projects and was the first adventure game by LucasArts to use 3D computer graphics overlaid on pre-rendered static backgrounds.  Released in 1998, Grim Fandango was a noir adventure game set in the Aztec afterlife featuring characters similar to the papier-mâché skeleton decorations found during the Mexican holiday Dia De Los Muertos (Day of the Dead).

The year prior to the release of Grim Fandango LucasArts started to shift focus away from adventure games to develop more action-oriented games following the general trend that the game industry was moving in.  When Grim Fandango released it was praised across the industry and received glowing reviews from critics however it did not meet its sales projections.  Uncertain of the direction that LucasArts was heading staff started to leave for other opportunities.  Schafer was approached by colleagues suggesting they launch their own game development studio. 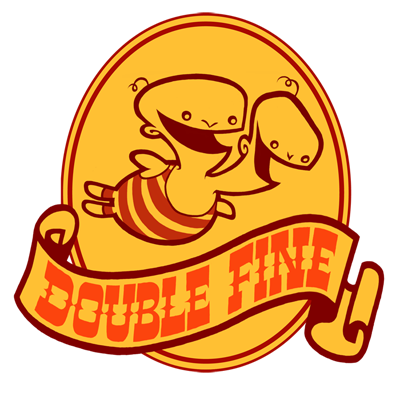 In light of this Schafer split the development team into four groups for a two-week period and tasked them to develop a game prototype that would be reviewed by the other groups.  Four prototypes were created during these breakout sessions, the four prototypes were “Custodians Of The Clock”, “Happy Song”, “Love Puzzle” and “Tiny Personal Ninja”.  The process was repeated a second time towards the end of development on Brütal Legend and two additional prototypes were produced, “Costume Quest” and “Stacking”.

After the completion of Brütal Legend the development studio shifted focus to develop smaller initiatives in an effort to become financially viable.  The two later prototypes would become their next projects.   In 2010 they released Costume Quest followed by Stacking in 2011.   The studio continued to work on smaller scoped projects and licensed projects to secure their financial position.  Double Fine had great commercial success with the smaller titles giving them the flexibility to diversify their portfolio.  The studio was able to acquire the rights to remaster some of the early LucasArts adventure games, including Grim Fandango, Day of the Tentacle and Full Throttle.  While continuing to develop smaller projects the studio remastered the three classic titles releasing Grim Fandango Remastered in 2015, Day of the Tentacle Remastered in 2016 and Full Throttle Remastered in 2017.

As the President and CEO of Double Fine, Schafer has proven that he is able to adapt his company based on market demand, shifts in the gaming industry and financial uncertainties.  Along with his executive responsibilities he continues to act as the studio’s creative director and writer for the Psychonauts series.  Schafer is a popular personality in the video game industry and has hosted numerous award shows and conducted developer interviews at video game developer conferences.  In 2018 Schafer was awarded a Lifetime Achievement Award from Game Developers Choice Awards and received a BAFTA Fellowship at the British Academy Games Awards for his contributions in the video game industry.