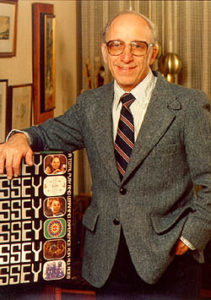 Prior to Ralph Baer’s involvement in the video game industry no video games were ever released to the general public or commercialized due to the expense of the technology that was needed for these games to be played. Previous games were created with no commercial potential in mind as they were experiments in university labs. It wasn’t until 1966 when Ralph Baer came up with the idea to create a gaming system that would work on a standard television set with inexpensive materials.

It was technically 1951 when Baer first conceived of the idea to create a game that could be played on a television set but at the time it was not for the purpose to create a commercialized game but to demonstrate what televisions were capable of doing. When he was designing a television set at Loral Electronics in 1951 he proposed the idea of creating a built in game to differentiate their television sets from their competition. Management at Loral Electronics passed on the idea and Baer would not revisit his idea until 1966 while working at Sanders Associates Inc.

In 1966, thoughts about playing games using an ordinary television set started to make perfect sense to Baer. There were about 40 million television sets in the homes of America not to mention the rest of the world and Baer seen the potential to create an affordable gaming system that would be marketed to the general public. It was in August of 1966 while Baer was on a business trip in New York that he started planning out the details around his idea to create the first television set gaming device.

While waiting at a bus terminal for another Sanders engineer to arrive in town for a meeting with a client, Baer took the opportunity to write down some notes on the subject of using standard home television sets to play games. The following morning he turned his notes that he written down into a four page paper which described the idea of playing television games on a home television set. The document listed various types of games that might be playable using a standard television set, such as action games, board games, sports games, chase games and many others. Baer was creating what is now known as video game genres even before a system was created. The four paged document is now located at the Smithsonian along with all of the game hardware that was created over the next three years.

What Baer originally had in mind was to develop a small game box that would play simplistic games and perhaps cost $25 at retail. He asked one of the engineers in his division at Sanders Associates to read, date and sign the document he created as this was a standard procedure to establish a legal record. This document was used years later in 1974 in Federal Courts in Chicago, San Francisco, New York, Ottawa and many other cities in pursuit of patent infringement which would result in millions of dollars changing hands.

Sanders Associates was a military electronics company and video games had absolutely nothing to do with the normal business of developing complex military electronic systems. At the time Baer was a Division Manager and Chief Engineer for Equipment Design at Sanders were he ran eight departments with up to 500 technical and support personnel. He also supervised much of the internal research and development work at Sanders. Baer was running a large operation at the time and could afford to utilize a technician to do some experimental work without affecting his division’s productivity. After a few demonstrations to the Corporate Director of Research & Development at Sanders it wasn’t long before the project became official and would eventually payoff very handsomely for Sanders.

The development of the gaming device continued through 1968 with most of the work being done by two engineers, Bill Harrison and Bill Rusch. Both of these engineers made important contributions to the game concept as Baer supervised the activity which was being done at Sanders Canal Street building in Nashua, New Hampshire. Several game systems were developed which allowed them to play different types of sports games such as Ping-Pong, volleyball, handball, soccer, hockey and several others. They also developed a light-gun which could be used to shoot at targets on the screen of the television set. Though this was not the first light gun game it was the first light gun developed to work on a television set , the first to be used in a video game and was the first video game peripheral.

By late 1968 Baer finished building their final demonstration game system, the “Brown Box”. It was switch programmable and played a large number of sports, maze and quiz games. The system also had several games based on the light-gun which was created and gave the ability to shoot at stationary or moving targets displayed on the screen.

The system was finally complete and the technology that went into the system was something that could be massed produced at a reasonable cost to allow for it to be marketed to the general public. Baer tried to introduce video games to the cable television industry in 1968 but was not successful. He then proceeded to approach American television manufacturers throughout 1969 in hopes that they would be interested in this new concept. The “Brown Box” was demonstrated to representatives at RCA, Sylvania, GE and Motorola but no one was willing to take the risk involved in marketing the new concept to the general public.

Representatives from Magnavox went to Sanders Associates in Nashua, New Hampshire where Baer and his team demonstrated the “Brown Box” for them. The reactions were overwhelmingly favorable but still it was seen as a large risk for Magnavox and they held off on moving forward. Two years later in 1971 Magnavox revisited the idea of television gaming and finally took a license from Sander Associates. Their 1972 Odyssey home video game system, a production engineered version of the “Brown Box” was the result. This was the first home video game console and was the beginning of the home video game market which is now a multibillion dollar industry.

The first generation of home consoles were made between 1972 and 1977 with three major companies competing to become the leader in the home video game market. The first to be release was Magnavox Odyssey followed by Atari’s Pong home console and then the Coleco Telstar systems.

The Magnavox Odyssey was first demonstrated on May 24, 1972 and released in September 1972 with a price tag of $100. The system was a redesign of Ralph Baer’s “Brown Box” prototype which was completed in 1968. By the time the system was released to the general public it was 4 year old technology and the video arcade market was just gaining ground and had more advance technology.

The Odyssey system was powered by batteries, lacked any sound capability and was bundled with 2 controllers, 6 C batteries, 6 game cards which were capable of playing 11 games and 22 screen overlays (2 per game to support 2 different size television screens). The 11 games that were bundled with the system were Analogic, Cat & Mouse, Football, Haunted House, Hockey, Roulette, Simon Says, Ski, States, Submarine and Tennis. In addition to the game cards and screen overlays the system came bundled with game accessories such as dice, scorecards, play money, casino chips and playing cards for each game.

The Odyssey used a type of removable printed circuit board card that inserts into a slot on the front of the system. There was no power switch for the console as the system would turn on once a game was inserted into the system and turn off once the game was removed. The printed circuit board cards did not contain any components but had a series of jumpers between pins of the card connector. These jumpers merely unlocked onboard programming to play certain games and the cards themselves did not contain game data. Add-on games were sold individually for $5.49 or in a pack of 6 for $24.99. Some of the add-on games did not include a game card but just new overlays and instructions that could be used with one of the game cards that came bundled with the system to give it a new functionality.

The system was sold with plastic overlays that were placed over the television screen to simulate graphics that the system was not capable of producing. The overlays only supported two different television sizes and multiple overlays could be used with the same game card to allow for a different game play experience. Along with the overlays the system came with dice, casino chips, score sheets and game play cards to allow for a better variety of gameplay.

The Odyssey was not a huge success as it only sold around 330,000 units worldwide during its four year production.  Sales for the console were hurt by poor marketing and misinformation as many consumers believed that the Odyssey would only work on a Magnavox brand television.  This led to other consoles in the future writing an explanation on their box saying “Works on any television set, black and white or color” to avoid any confusion.  Magnavox restricted the sales of the Odyssey to Magnavox franchised dealer stores only which narrowed the potential sales base considerably as the system was not widely available in many areas.  Magnavox also mismanaged the sale of the additional game packs and system add-ons as sales personnel were not educated on the Odyssey. Magnavox discontinued the Odyssey in 1975 after releasing 11 game cards with the ability to play 28 games in total during the system’s lifespan.