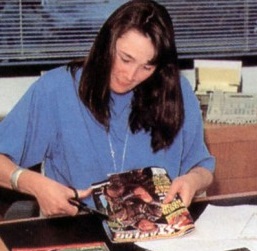 Tilden was at the forefront of Nintendo expanding from Japan into North America to broaden their market share. With Nintendo entering the North American market after the video game crash of 1983 it was crucial that their products be marketed and advertised appropriately in order for them to win over customers and become successful. Tilden’s initial responsibilities was marketing and public relations for Nintendo’s arcade games. This was primarily accomplished by marketing to distributors at trade shows and printed material.

During the launch of the Nintendo Entertainment System, Tilden was responsible for the identity of the console. She managed the creation of the packaging, television advertisements, public relations, direct marketing, consumer research, agency reviews and selection. The Nintendo Entertainment System became a massive success, dominating the video game market in the late 1980’s.

In March of 1988, Tilden was promoted to Director of Publications and shifted focus on the creation of a monthly video game magazine. During this time Tilden founded the Nintendo Power magazine and was responsible for the entire publication division of Nintendo of America. She served as the editor-in-chief of the magazine and was also involved with the creation of Nintendo Power’s Guides, a series of video game strategy guides. The magazine focused on gaming news, previews, reviews and strategies. The magazine was designed to inform and assist consumers with everything offered on Nintendo platforms. Tilden filled the role of Editor-in-Chief of the magazine which was an instant success right from the start.

With Nintendo Power well established and the growth of the internet, Tilden launched Nintendo’s web presence with Nintendo.com in 1995 before being promoted to Vice President of Brand Management in 1998. As VP Brand Management Tilden was responsible for growing Nintendo’s brands in entertainment and licensed merchandise. In this position Tilden lead the introduction of all aspects of the Pokémon brand to audiences outside of Japan.

Before Tilden’s department with Nintendo in 2007, she was involved in product development, testing and localization of certain games. She overseen second party product development projects and localization of all Nintendo software in Nintendo’s “Tree House” department. She worked with key software partners such as Rare, Left Field, Angel Studios, etc. as well as managed leagues and endorsement relationships with MLB and NBA.

After 24 years with Nintendo Gail Tilden made the decision to leave to work as a freelance consultant and focus on her own start-ups. She has since served on the board of directors of the Girl Scouts of Western Washington and founded Muttles, a brand of mini plush packs sold like trading cards. Tilden is presently working at Oliver Henry Games as the co-founder, and as a freelance brand strategy and marketing consultant.