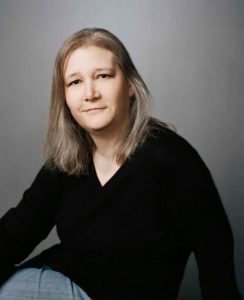 Amy Hennig is an American video game director and writer best known for her work on the Uncharted series.  Hennig began her career in the video game industry when she took a job as a freelance artist in 1989 to work on an Atari 7800 game entitled Electrocop.

The game was going to be a follow up to the Atari Lynx launch title of the same name.  Even though the game was finished in 1990 it was never released.  By 1990 the Atari 7800 was completely overshadowed by the Nintendo Entertainment System and was in the process of being discontinued.

While working on Electrocop Hennig was attending film school at San Francisco State.  During the course of her involvement with the development of the game she came to realize that video games were a more interesting and pioneering medium than film.  This realization led to Hennig dropping out of film school to focus on video games.

She continued to work on video games as an artist landing a job with Electronic Arts in 1991.  In 1993 she was given the opportunity to back fill the role of lead designer on Michael Jordan: Chaos in the Windy City for the Super Nintendo when the lead designer quit.  Hennig jumped at the opportunity to take on more responsibilities and to be more involved in the influential aspects of game development.  After the games release in 1994 Hennig had little desire to only contribute in the development of games as an artist.  As someone who was originally attending film school, she wanted to be able to develop and tell her own stories. 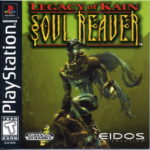 Continuing to pursue opportunities to become more involved with the story aspect of video game development she accepted a job with Crystal Dynamics in 1995 where she would be able to direct games and contribute with writing the scripts for the games.  Beginning her career at Crystal Dynamics as the Design Manager for Blood Omen: Legacy of Kain for the PlayStation, her influence on the game turned it into a franchise.  Hennig and Seth Carus wrote and developed a script for a new game called “Shifter” which ended up being reworked into Legacy of Kain: Soul Reaver at the request of management.  Hennig was put in charge of the project and would act as the producer, director, designer and writer for the game.

Hennig joined Visceral Games in April 2014 to begin work on a Star Wars project.  In 2017, Electronic Arts announced that they would be shutting down their subsidiary company Visceral Games and that the Star Wars project would be delayed and moved to another studio to allow for significant changes.  Hennig was unhappy with the direction of the game and chose to part ways with Electronic Arts in January 2018 to work as an independent to explore opportunities involving virtual reality games.

In November 2019, Hennig joined Skydance Media, the Hollywood studio behind Mission Impossible and Terminator movies.  Hennig accepted the role of President, New Media Divisions to start a new game studio for the creation of story-based video games.  The studio said that it will create new story-focused experiences that will employ state of the art computer graphics to provide a movie like quality with an active experience that places the audience in the driver’s seat.  Shortly after Hennig join Skydance Media their game division Skydance Interactive released “The Walking Dead: Saints & Sinners”, a VR experience for the PlayStation 4 and PC. The game was praised upon release and a good start for the new studio.

Hennig’s work has influenced a multitude of video game creators and is beloved by millions of gamers.  In March 2019 she was presented with the lifetime achievement award at the Game Developers Choice Awards and remains one of the most influential video game creators.